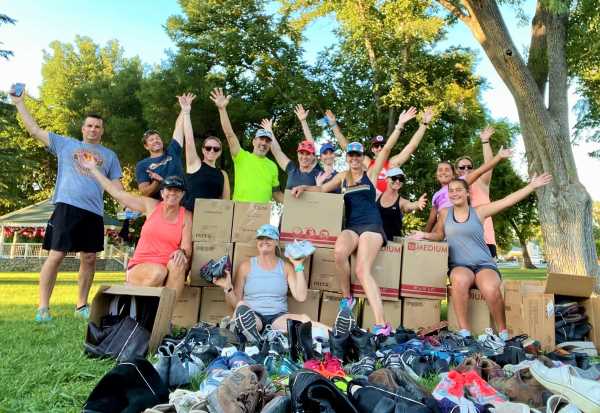 -A Twin Cities Community Hospital Emergency Nurse, Rosalie Smith, and a Sargent at the Morro Bay Police, Nicole Taylor, announced the results of an extremely successful shoe drive – “Soles4Souls” (https://soles4souls.org/about-us) – where over 300 pairs of shoes were collected to be donated as part disaster relief efforts around the world.

Smith and Taylor are the founders of the Templeton Run Club and coach the Cross Country program at Templeton High School and hosted the month-long Shoe Drive as part of Global Running Day (June 2) and collected over 300 pairs of shoes – surpassing their goal of 200 by over 100 pairs.

Soles4Souls, a non-profit organization that creates sustainable jobs and provides relief through the distribution of shoes and clothing around the world, estimates that the donation of 300 pairs of shoes will save approximately 9,000 pounds of carbon dioxide emissions released when new shoes are manufactured, and keeps 375 pounds of textiles out of landfills. Moreover, in countries like Haiti and Honduras, they estimate 300 pairs of shoes can provide food, shelter and education for a family for five months.

The Templeton Run Club consists of local community members including many nurses, doctors, and staff from Twin Cities.