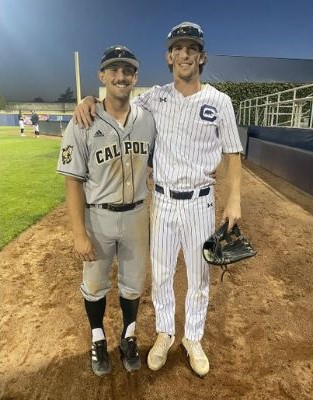 – After two days of the Major League Baseball Draft, several North County and Cal Poly players learn they’ll soon be playing at the next level.

He is the son of Cal Poly head coach Larry Lee, who also played professional baseball.

The 8th selection in this year’s draft has an assigned signing bonus value of $5.4 million dollars.

Cal Poly pitcher Drew Thorpe was taken in the second round by the New York Yankees. Thorpe was one of five nominees for pitcher of the year in college baseball. He placed second in the nation in strikeouts during the 2022 season. Overall, Thorpe was selected #61. He is from Washington, Utah, which is near St. George.

On Monday, Cal Poly pitcher Jason Franks was selected in the 8th round. Franks played for Cal Poly’s club team for two years before joining the varsity. He became the team’s closer in 2022. He was one of the best closers in the Big West with 11 saves for the season.

Another pitcher with ties to Cal Poly was drafted in the first round by the St. Louis Cardinals. Cooper Hjerpe was selected 22nd overall. Recently, Hjerpe was named the top pitcher in collegiate baseball. The Oregon State southpaw led the nation in strikeouts. Cooper’s dad pitched for Cal Poly in the ’80s.

The number one pick in the draft overall was Jackson Holliday of Stillwater High School in Oklahoma. He was selected by the Baltimore Orioles. Holliday is a shortstop. His father, Matt Holliday, played 15 years in the major leagues.