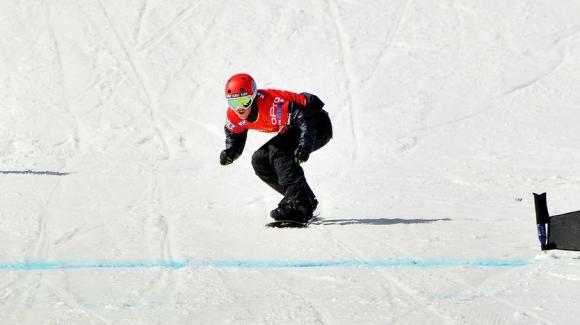 When the Winter Olympics in Sochi, Russia kick off in February, residents of Paso Robles will be cheering on one of their newest neighbors, Trevor Jacob, as he leads the U.S. Snowboard Cross team in what he hopes will be a gold medal-winning race.

Jacob, 20, is the youngest member of the team and earned the top spot after he took first place in the World Cup snowboard cross event in Andorra on Jan. 11. After competing in snowboard halfpipe and slopestyle for many years, he became a regular on the MTV Nitro Circus – described as an “action sport collective” – at the age of 18 and went on tour. Missing snowboarding, Jacob decided to give snowboard cross a try, loved it, and won some time trials in New Zealand. Before long, he started training with the U.S. team, was the National Champion in 2013 and qualified for the World Cup Series.

“To represent the U.S. at the Olympics, knowing how hard I worked and then met my goal of making this happen, is pretty amazing,” Jacob said during a telephone interview earlier this week. “This is just the happiest that I have ever been – it’s just an unexplainable feeling of pure happiness.”

Born in Malibu, Jacob and his family moved to Mammoth in 2002 where he was homeschooled alongside his older brother, Jordan. The two “very active” brothers spent time biking and skateboarding with their friends and with one another. He credits his parents, Jerry and Lynn, with instilling a love for snowboarding at an early age. With support from his family – his dad has been able to travel and train with him – Jacob, at just 13, was the youngest ever to qualify for halfpipe finals in the U.S. Open and he has seen his career take a continuous climb ever since.

Since being added to the Olympic program in 2006, the U.S. men’s team has brought home two gold medals and the women’s team has earned a silver medal. As the newest and youngest team member – three female, four male – Jacob hopes he and his fellow athletes will bring home medals from the 2014 games and “keep that train moving.” The 1,250 meter course at Sochi, one that Jacob tried out last year, has eight turn sections, jumps, rollers and a 210 meter vertical drop.

“I’m just going to go over there and give it my best shot,” Jacob said, “but however it turns out I plan to be content and have lots of fun.”

Calling the experience “somewhat surreal,” Lynn said it is starting to sink in that her youngest son is actually an Olympian.

“Sometimes I think ‘is this actually happening?’ and yes, it is – after all of those years watching and waiting at the end of the finish line,” Lynn said. “We are just really proud of him. He set his goal to one day be in the Olympics and he excelled at his sport.” 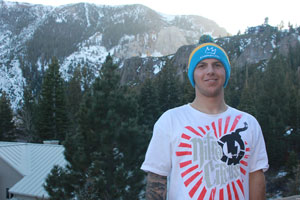 Residents of Paso will be cheering on local snowboard cross Olympian Trevor Jacob, pictured outside in Mammoth, as he takes part in the U.S. Snowboard Cross event, scheduled for Monday, Feb. 17 at 11 a.m. Sochi time. Courtesy photo.

Jacob purchased a home locally in early 2013 and, with the help of his dad, kept busy with remodeling projects last year. He said he fell in love with the idea of living in Paso Robles after visiting a friend over the past couple of years.

“Paso Robles and the surrounding areas are so beautiful and I can relax here – I just love it,” Jacob said. “I can just escape the whole world when I’m home in Paso. I travel regularly to Mammoth for the snow and other areas for training, of course. But I love to return back home here where I can enjoy a more simple life in such a great area.”

One of the first projects upon Jacob’s move to Paso – building and setting up skateboard ramps in his backyard – also helped him cross train. Explaining that skateboarding involves many of the same moves as snowboarding, Jacob said he was able to get in a lot of practice on “the wood.”

“It’s definitely a work in progress and we will probably build it up more next year,” he said. “But it was enough to help me get in some training.”

Lynn and Jeff will be in Sochi cheering on their son as he takes part in the U.S. Snowboard Cross event, scheduled for Monday, Feb. 17 at 11 a.m. Sochi time. Back home in Paso Robles, Jacob will have plenty of new friends watching as well, including a supportive group from Oakhill Market.

“That’s my main spot – Oakhill Market out by the lake,” Jacob said. “They made an early Thanksgiving dinner for my family because I had to leave for the Olympic trials. It was great, those guys are so awesome.”

And what’s on this Olympian’s plate after he returns from Sochi? More Nitro Circus – including an Australian tour – more fun on the slopes and more down time in Paso Robles, the quiet and peaceful place Jacob now calls home.