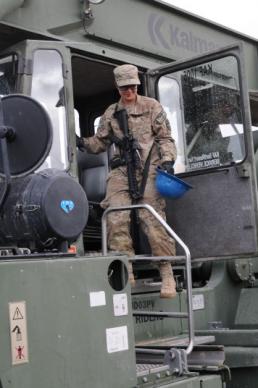 KANDAHAR AIRFIELD, Afghanistan – Don’t let her five-foot, one-inch height fool you, Paso Robles, Calif., native Spc. Jackie Tackett, an automated logistics specialist for the 349th Quartermaster Company, California Army National Guard, says she’s just as comfortable behind the wheel of the huge, rough terrain container handler vehicle as she is behind the wheel of a sedan.

Maneuvering around the retrosort yard at Kandahar, Tackett easily handles the vehicle which might be intimidating to some people, picking up huge containers full of equipment and moving them to areas for eventual processing.

“I like the fact that sometimes it takes a lot of ingenuity when you’re driving the RTCH,” said Tackett. “You have to know your capabilities and the vehicle’s capabilities. Nothing is ever the same, so you have to find creative ways to sometimes get containers out of a tight spot.”

At the start of a typical work day, the 24-year-old specialist is out performing maintenance checks and fueling vehicles. Along with being licensed on the RTCH, Tackett is certified on a whole host of other vehicles to include forklifts and large, military tractor trailer trucks.

When she isn’t driving vehicles, Tackett assists other 349th troops on a retrosort team, inventorying, cleaning and getting reusable items ready for use by troops in theater, for shipment to other military bases throughout the world or for transfer to Afghans through programs such as Foreign Excess Personal Property.

“We’ll load what needs to be loaded, check on the vehicles and try to get containers as quickly as possible. Sometimes other units [throughout Afghanistan] will drive all night to get here, so we like to do a quick turnaround for them, off-loading their trucks as soon as possible,” said Tackett. “We’ll inventory what we have, figure out how best to process them, use forklifts to take equipment out of containers, clean, sort and eventually we’ll load boxes of supplies onto another truck for shipping back to the states or elsewhere in the military system.”

When difficult situations arise, requiring “out of the box” thinking, Tackett said she’s usually the first person to volunteer.

“Someone came up to me one day and asked ‘is there any way you can get that out’,” said Tackett, explaining a situation in which containers were placed in a difficult spot even for the RTCH to reach. “Challenge accepted! I told them to give me thirty seconds. It was a lot of fun.”

In her civilian job as a dual status government service civilian, Tackett works as a shipping/receiving post office manager for Headquarters and Headquarters Detachment, Maneuver Training Center at Camp Roberts, Calif., near the town of San Miguel.

Her civilian job, she said, is fairly similar to what she’s currently doing, so she feels pretty comfortable with the mission in Afghanistan.

“I’m currently the only person at my job on Camp Roberts, central coast, who’s certified to drive the RTCH in my civilian work, so it’s not that much different in some aspects to what I’m doing in the combat theater,” said Tackett, who began her career in the military as an intelligence analyst, later deciding that she wanted to go into logistics.

During her spare time, Tackett plays soccer, watches movies, talks to family online or can be found writing songs or playing her guitar.

“I like to do open-mic nights at the USO or other places,” she said. “I like acoustic, indie music with influences from 90’s grunge to rag roll and other music that some people might think is a little eclectic.”

“People here look at my playlists and think some of the selections are obscure, but I tell them they’re really not. They were all popular bands at one time,” added Tackett with a laugh.

Tackett’s future goals include continuing to save money and going to a community college taking classes in general education until she finally decides on a career.

“It’s good to have a tangible plan, many people have hopes but they don’t have it planned out yet and don’t know how to achieve their goals,” said Tackett. “But I have a pretty good idea of how to get there and I’m going to sign up for classes, but as for a major, I’ll wait and see.”

Growing up in an Army family, Tackett said her parents have been very supportive of her time deployed to the combat zone. Her father was an Army Ranger and Tackett spent her early years as a self-described Army brat until age seven, moving from bases like Schofield Barracks, Hawaii, to Fort Campbell, Ky.

“They’re ready for me to be home, but they’re extremely understanding,” said Tackett. “My mom’s reaction was ‘that’s so typical of Jackie to volunteer’ [for the deployment] and my family is used to me being in different places.”

Tackett said she feels a sense of pride which led to her volunteering for this current deployment in support of Operation Enduring Freedom.

“This was definitely on my ‘to do’ list, I feel really great about it and I believe that most people—most Soldiers—have a sense of duty and every Soldier feels it’s something they need to do,” said Tackett. “With the experience gained here, it will help me stay competitive when I become a noncommissioned officer.”

“It will help me develop the skills needed as an NCO to lead a team one day,” she added.

As multiple bases in Afghanistan transform through deconstruction projects, Tackett, who is attached to the active-duty Army’s 82nd Sustainment Brigade-U.S. Central Command Materiel Recovery Element, based out of Fort Bragg, N.C., said she understands the importance of the CMRE’s materiel reduction mission.

“It’s nice to know we’re putting money back into the military system and ensuring troops are getting good equipment they need as bases downsize here,” said Tackett. “With a mission like this one, it’s easy to see what your goals are and you can actually count how many [containers] and how much [equipment] you’ve [processed] at the end of the day. It really keeps me motivated as I know we’re actually accomplishing something.”