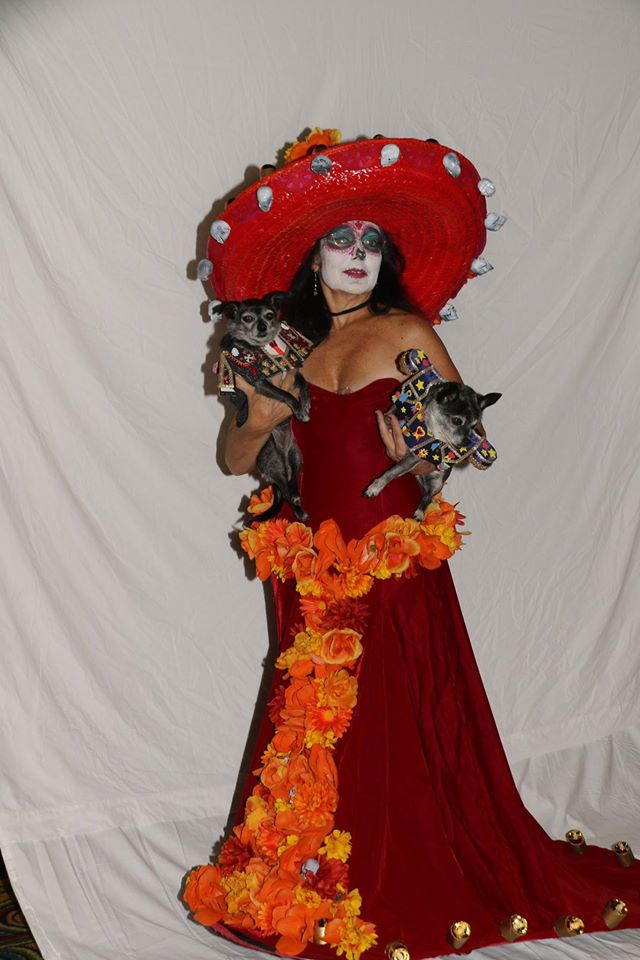 Neville-Olson, Lilly and Pez in their winning costumes at LosCon 42.

‘I think you should wear a costume to any event, anytime’

–Liza Neville-Olson’s passion for costumes was rewarded with second place at this year’s LosCon Science Fiction Convention. Neville-Olson, a resident of Atascadero, has been making and wearing costumes since childhood. “I think you should wear a costume to any event, anytime, and, of course, match the outfit to the event or theme,” she says.

This year Neville-Olson designed her costume for the LosCon Masquerade Contest to honor the memory of a recently passed friend. “The last movie he and his fiancee watched together was the ‘Book of Life.’ I thought I would have more time with him, but that is just how it was,” she says. Neville-Olson says she expressed her regrets over not being able to say goodbye by recreating La Muerte, Joaquin and Manolo from the story. “I dressed as Muerte and made Joaquin and Manolo costumes for my service dogs, Lilly and Pez.”

As a child, Neville-Olson says she was only interested in Barbie dolls because they gave her the opportunity to design clothes and decorate rooms for them. “I made saddles and head gear for all of my horse toys, too.” Making costumes for herself and friends in the ninth grade led to her attending mythic and recreation societies by the tenth grade. “The tenth grade was when my enchantment started with the Mythopoeic Society, the SCA (Society for Creative Anachronism) and science fiction and mythical conventions.” Neville-Olson was one of the early followers of the Labyrinth of Jared Masquerade Ball. 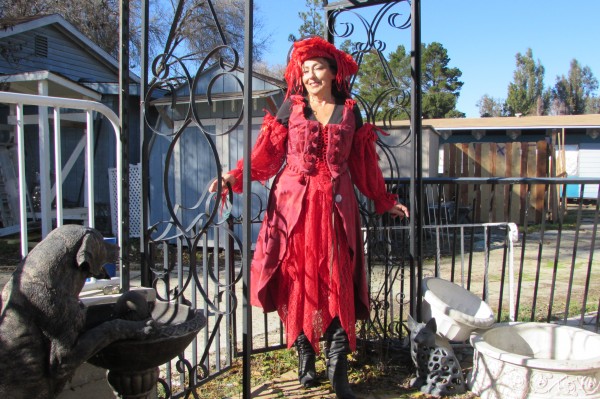 Pirate costume for the first Labyrinth of Jared Masquerade

“I was very ill for a long time after I moved up to the Central Coast and I wasn’t able to get to many events. By the time I was feeling better I had Rocky Mountain my service dog. Since he was with me wherever I went I decided to make matching costumes for both of us. Rocky was always a favorite of the LosCon audience.” 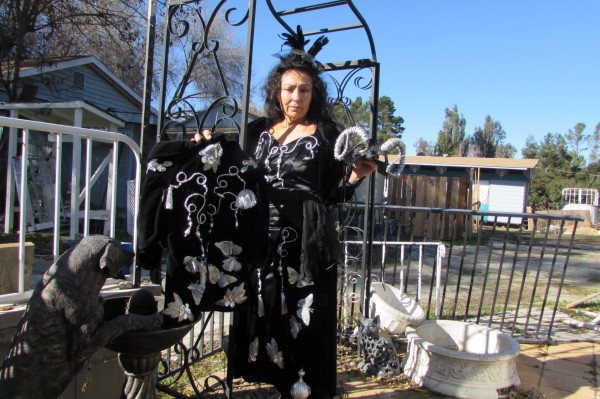 Neville-Olson gets her ideas from movies or pictures and events; sometimes a comment or joke sparks an idea. “My favorite era for costumes is Medieval through Renaissance but I really like fantasy and steam punk so Victorian costuming has caught my attention.” These days Neville-Olson attends as many events, conventions, and fairs she can that involve a costume, including last week’s Dickens Fair in San Francisco. She belongs to the Costumers Guild West that organizes the four day Costume College every August in Southern California.

“I like to dress up so anyplace anytime is okay with me. It is more fun when you have others who enjoy costuming and participate with you. Costuming is a creative process not just for actually making them, but for wearing them and doing skits and presentations on stage with others. When other people are looking for items to decorate their homes or repair something I’m seeing things that can become part of a costume.”