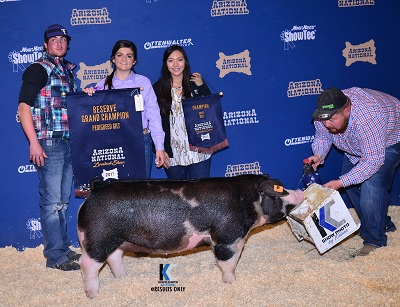 –The Arizona National Livestock show 2017 Reserve Champion Purebred Gilt was shown by Christy Awalt from Paso Robles. “It was one of the goals of mine,” Awalt said. “I didn’t think I would get reserve.I’m so excited.”

Awalt, 15, attends Paso Robles High School, has been showing hogs for four years and is a third year year exhibitor at the Arizona National. “This pig is heavy structured, awesome to look at, awesome design,”said swine judge Brian Anderson.

The Arizona National Livestock Show, an annual Phoenix tradition since 1948, is the largest livestock show in the Southwest bringing more than 1700 head of cattle, swine, sheep, and goats from 27 states to compete for a highly-coveted slot in the Sale of Champions.