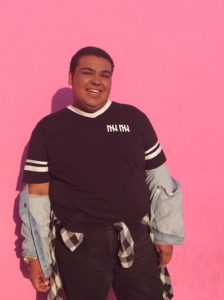 —Atascadero local Christian Garcia is no stranger to social media fame: he currently has over 5 million views on his YouTube channel, has competed on the X-Factor Mexico, and has over 290 thousand followers on Instagram. In addition to his work online, Garcia is a motivational speaker and is currently working on a book that aims to inspire high school students and discuss his relationship with God, along with the upcoming release of his gospel album in spring 2018.

“[My motivational speaking is] about how you’re not alone and there are so many things to do to make you feel better about yourself,” said Garcia.

Garcia started making music cover videos in early 2016 with his sister, which later evolved into videos relating more to lifestyle and DIY ideas. Garcia collaborated with his friend Karina Garcia for a slime video, called “DIY Starbucks Ombre Slime with Karina Garcia”, which became his most viewed video on his channel. Karina Garcia is one of the creators who started the recent DIY slime trend and was featured on The Today Show and Good Morning America. They collaborated on a video titled “DIY Metallic Slimes! Pink, Gold, Crunchy Slimes!” which was posted onto Karina Garcia’s channel and gained over 6 million views. Christian Garcia has also collaborated with other YouTubers on their specific channels, with their videos gaining over a million views. For his YouTube channel, Christian Garcia signed on to Broadband TV and also worked with different companies that help with his video production and travel expenses to multiple conventions through ad revenue.

“I’ve met so many fans at different events… a lot of them had told me, ‘You inspire me…’. It’s all so inspirational and what I want to stand for at the end of the day. I want my fans to know they’re not alone. It doesn’t matter how many followers you have but what makes you as a person,” said Garcia, who is planning to continue meeting fans through events, such as participating in a spring 2018 YouTuber tour with other creators.

Christian Garcia started singing pop music at local county fairs when he was seven years old. After taking a break, he auditioned and made it to the top 30 for the X-Factor Mexico, where after his elimination, took a second small break from his singing career. He started performing gospel music in 2016 and began work on an album after a company approached him with the idea. Once the album is released on Spotify and iTunes, Christian Garcia will embark on a local tour, which dates can be found later this month on his Instagram account.

Christian Garcia’s long-term goal is to be a full-time YouTuber, which requires daily video posting. He plans to start in January 2018 and to gain half a million subscribers by the end of March 2018.