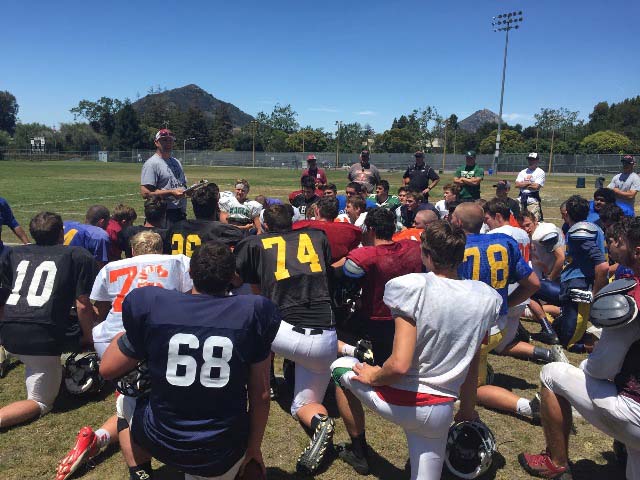 Rich Schimke, head varsity coach for the PRHS Bearcats and the head coach for Team North for this year’s FCA Football Classic, addresses his players during practice at SLO High over the weekend. Seniors from SLO and SB counties will take the field at Santa Ynez High School on June 6 with kick-off scheduled for 7 p.m. Courtesy photo

Players from eight San Luis Obispo County high schools are teaming up to face off against Northern Santa Barbara players in the 5th Annual FCA All-Star Football Classic on Saturday, June 6 at Santa Ynez High School. Gates open at 6:30, with kick off scheduled for 7 p.m.

“The kids really gear up for this game and everyone there is able to witness football being played at its highest level,” said Bill Stansbury, one of 14 executive committee members. Referring to the athletes as “the best of the best” he said that, as a fundraiser, the event directly benefits athletic programs at the 15 represented high schools. “Just as in years past, this will be a top-quality, competitive game.” 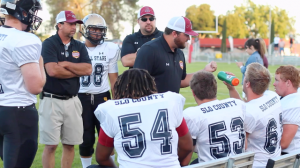 Team North coaches give a talk to players during a break in the 2014 game, played at War Memorial Stadium. Courtesy photo

Rich Schimke, head varsity coach for the PRHS Bearcats, is the head coach for the team this year and, with the help up coordinators on both sides of the ball, hopes to bring home the win.

“The talent level on this team is pretty high, of course, but what I like the most is the camaraderie amongst all of these guys,” said Schimke. “They exhibit all of the core values of the FCA and that’s what it’s all about.”

Vic Cooper, head varsity coach for the AHS Greyhounds, is sharing offensive coordinator coaching duties with Nipomo’s Russ Edwards this year. He agreed with Schimke’s sentiments, saying, “We are working with some all-star players during practice this week – they are working together and they are having a really great time.” 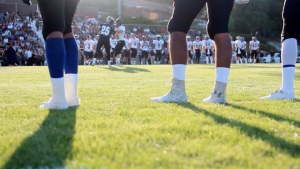 Players from SLO and SB counties take to the field at the 2014 FCA Football Classic. Courtesy photo

Team North will be looking for a victory over Team South, also known as Team Santa Barbara, which is made up of seniors from Santa Maria, St. Joseph, Righetti, Pioneer Valley, Santa Ynez, Cabrillo and Lompoc. The game location alternates between the two counties each year; the 2014 event was held in Paso Robles.

Partnering up to raise funds 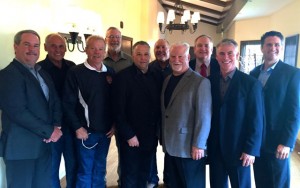 Sponsored by the Fellowship of Christian Athletes, the football classic is coordinated by a committee of retired and current coaches, officials, and business leaders. The annual event gives a select group of seniors to play football together one final time before they move on to attend college or pursue a career. It also has the coaches working together, putting aside any rivalry they show during the regular football season, and gives sports fans a chance to witness a spectacular game while supporting local high school athletic programs.

FCA Central Coast Area Director Luke Llamas said the event celebrates and promotes the participating players, honors local coaches and officials for their continued dedication, raises much-needed funds. With more than $614, 690 raised over the past four years, Llamas said he expects a higher attendance at this year’s game.

“All of this is made possible by the unique partnership between the athletic community and the business communities,” said Llamas. “FCA exhibits the heart and soul of athletics with an emphasis on integrity, service, teamwork, and excellence – our core values.”

The fundraiser profits from ticket sales, donations, and a car raffle made possible by 12 car dealerships from the two counties that contribute $2,500 each. During half-time, one lucky $20 raffle ticket holder will be chosen to win $20,000 toward the purchase of a new vehicle at one of the dealerships. Major event sponsors are KSBY, Dignity Health and the Santa Ynez Band of Chumash Indians. The Olive Garden provides the Friday night team meal for Team North, with the Hitching Post feeding Team South. Saturday’s pre-game meal brings all players together courtesy of Cool Hand Luke’s with former Florida State player Chris Rix, now an announcer for Fox Sports, is set to address the players.

In addition to the car raffle, half-time festivities include the recognition of area coaches and officials and a Most Influential player from each team. Coaches being honored this year are the late Leon Criner, who coached SLO to the 1980 CIF Championship and also coached in King City, Santa Maria, Righetti, Alan Hancock, and the College of the Canyons, and Will Stensland, former long-time Santa Ynez High coach that led the Pirates to CIF Championship in 1960 and 1969. Sports official Jerry Mrozek will be recognized for his 40 years of officiating at the high school level and 30 years at the junior college level throughout the Central Coast.

Game tickets are available for $10 and car raffle tickets for $20 at the gate on game day at Santa Ynez High School. For more information, see www.centralcoastfca.org/football.