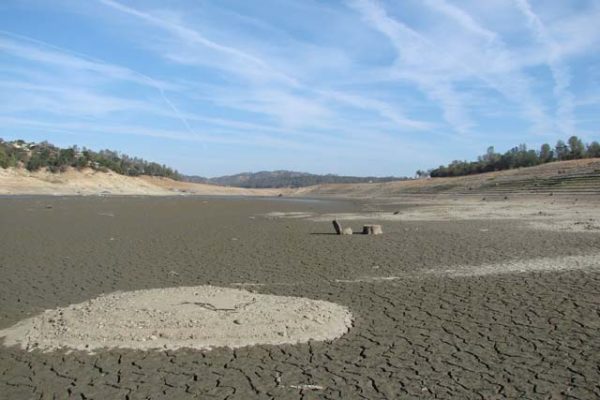 The Nacimiento Regional Water Management Advisory Committee has created a Go Fund Me fundraiser to raise $100,000 to help save Lake Nacimiento from being drained. So far the group has raised over $34,000.

“Lake Nacimiento may soon look like this if Monterey County doesn’t stop its continued mismanagement of the reservoir and massive taking of water,” the group announces on its page. “Please donate to the GoFundMe campaign… to prevent this disaster.”

Lake Nacimiento Save The Dragon Go Fund Me:

Lake Nacimiento, known as “The Dragon” because of its distinctive shape, is in extreme peril and needs your help. Millions of gallons of water are being taken out of the lake each day by Monterey County and sent north, primarily for the benefit of its farmers in the Salinas Valley, but also to support a fish habitat and to sell on the open market for profit. This isn’t simply “Water Over The Dam,” it is the moral equivalent of draining the life’s blood of The Dragon. Left unchecked, this massive release of water will devastate the local economy in San Luis Obispo County, where the lake is actually located, by curtailing recreation, depressing property values and reducing business and tax revenues. Although the farmers in the Salinas Valley are entitled to a fair share of the water, they are not entitled to ALL of it. There is no way of even knowing just how much water the farmers are getting, since much of it goes underground where it cannot be measured. It is also impossible to determine how much water, if any, is being wasted since that also defies measurement. What is clear is that ever since the time it completed a “divisionary facility” in Salinas, Monterey County has steadily increased the water it releases over the dam on a daily basis. See:
http://www.co.monterey.ca.us/home/showdocument?id=22189

Nacimiento Reservoir was originally designed and built by Monterey County for irrigation, flood control, groundwater recharge, and recreation. It was completed in 1957. Although the lake formed by the reservoir is entirely inside the geographical boundaries of San Luis Obispo County, the water is controlled by Monterey County under an operating license issued by the State of California. Over time, Monterey County has demonstrated that it does not care about the recreational aspect of its management of the lake, despite that component being of equal value to the others. Monterey County’s current attitude towards recreation at Lake Nacimiento borders on contempt.

The Nacimiento Regional Water Management Advisory Committee (“NRWMAC”) was formed in the late1980’s to represent Lake Nacimiento property owners, visitors and enthusiasts in dealing with Monterey County’s management of this precious resource. During its tenure, NRWMAC has fought to maintain a consistent and appropriate water level of 748 feet above mean sea level (msl). At this level, during most years, there is enough water to satisfy the needs of the farmers, meet the California Department of Fish and Wildlife requirements for the fish habitat and concurrently sustain recreation throughout the peak summer months – at least through Labor Day of each year. For the most part, NRWMAC has been successful in its attempt to maintain a mutually acceptable lake level. Lately, however, Monterey County has been promulgating the notion that a lake level of 730 feet msl will sustain recreation. This is absolutely not true. At that level, launch ramps and docks along the lake become unusable, and previously submerged rocks, tree stumps and islands start surfacing, posing hazards to boating.

NRWMAC has tried to negotiate a reasonable compromise with Monterey County over the lake level. Monterey County, however, will not negotiate. NRWMAC drafted and circulated a petition demanding a reduction to the massive and unreasonable daily water releases. This petition garnered over 6,000 signatures, and was presented to Monterey County in May of this year. Monterey County dismissed the petition, labeling it “factually inaccurate,” although it failed to explain how it was inaccurate. NRWMAC Directors have been on radio and television, and in print media, appealing for restraint over the water releases, but these effort have had no effect: Monterey County continues to drain the lake at its sole and unbridled discretion. Finally, as a last resort, and responding to the entreaties of its constituents, NRWMAC has been forced to retain a law firm experienced in water rights, and a team of hydrologists, to seek a legal remedy to halt the excessive outflow of water.

NRWMAC has exhausted nearly its entire operating budget by subsidizing the legal fees to date and now it needs your help. NRWMAC has started a GoFundMe campaign to replenish the funds necessary to sustain its legal challenge. It is estimated that a minimum of $100,000.00 is required to continue forward and resolve this issue. Please contribute whatever you can to help NRWMAC Save the Dragon, and please forward this email and this GoFundMe link to everyone on your mailing list.

NRWMAC is a non-profit organization. Because of the way it is structured, donations made to it, or to the legal fund it is sponsoring, are not tax deductible to the donor. For more information on NRWMAC, how it supports Lake Nacimiento, and to join its growing list of supporters, please visit its website at http://www.nrwmac.org.