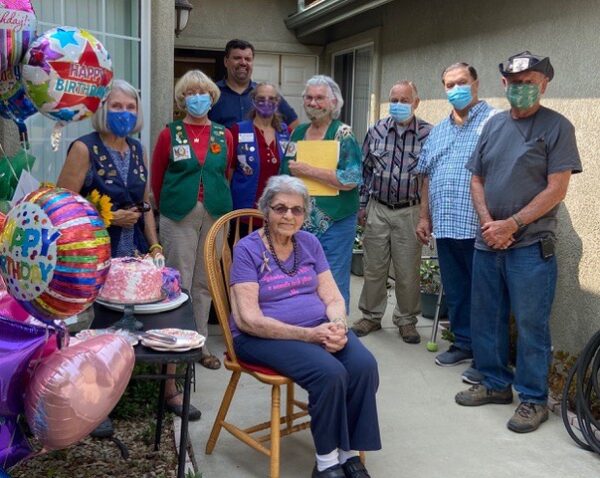 Edna was born in Hammonton, Calif. Her parents, Fred and Louise Clark, had a family of 9 children, of which she was their firstborn and now the only surviving child. Edna married “Buzz’ Charles Eyler in 1940 and moved to San Miguel in 1942 where they raised their three children—Ann, Chuck, and Rose. Rose Ripple is the only remaining child. Edna says she is “working on becoming the oldest woman in California.” She also acknowledges that she “has lived a very happy life.” She loved being a mom, but also loved helping in the community. She was a substitute librarian in North County for 30 years. She never missed helping in the classroom, scouts, PTA. She was honored as San Miguel’s Sagebrush Days Queen in 2002. She has been a devoted member of the Native Daughters of the Golden West, San Miguel Parlor #94 since the ’40s.

The San Miguel Parlor was established in 1887 and, after 133 years, remains as the only operating Parlor in North County and the oldest organization in San Miguel. The San Miguel Parlor’s mission, as one of the oldest associations of diverse California-born leaders, is to preserve California’s history and better the quality of life through active participation in education and community service. Edna loves California, and the Native Daughters.

Edna has lived life to the fullest and all the while touching many lives throughout her 100 years! As she begins her second hundred, she continues on with her positive attitude and desire to keep reaching for her goal of “oldest woman in California.”