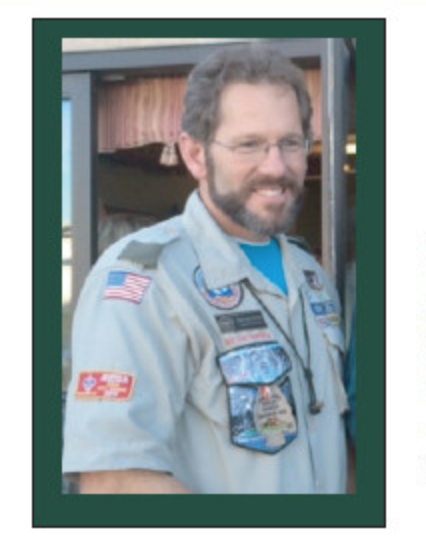 –Boy Scout Troop 60—the largest scout troop in the Los Padres Council, which encompasses all of San Luis Obispo and Santa Barbara counties—invites the community to a recognition ceremony honoring Troop 60 Scoutmaster Steve von Dohlen for his 11 years of service to the council and the troop.

The event takes place on Saturday, Sept. 29 from 2 p.m. to 4 p.m. at the “Scout Hut” located at 2247 Oak Street on the corner of Oak and 23rd streets in Paso Robles. The afternoon will consist of light refreshments; shared memories honoring von Dohlen; an awards presentation; and the introduction of Troop 60’s new Scoutmaster, Eric Anderson.

“Eleven years ago, when Dennis Collins retired as the Troop 60 Scoutmaster, he left some awfully big shoes to fill,” said David Kudija, a longtime assistant scoutmaster for Troop 60. “Steve has not only filled those shoes but has stretched them several sizes larger. Under Steve’s leadership, the troop has grown to be the largest in the Los Padres Council. Steve has amazed us all with his accomplishments in the troop. Not only does he have the ability to know the names of 81 scouts under his charge, but he also knows their stories.”

Some of von Dohlen’s “over and above” activities have included: Twice taking scouts from both Santa Barbara and San Luis Obispo counties to the Boy Scout National Jamboree; serving on committees at the Boy Scout District and Council levels; speaking at the National Scoutmaster Meeting, Western Division; counseling for the Boy Scout’s National Youth Leader Training; and acting as an advisor for Venturing Crew, a group affiliated with scouting.

Under von Dohlen’s watch, 31 Scouts graduated to the rank of Eagle, including his two sons, Tom and Alex. He is also credited with overseeing the simultaneous induction of 12 Eagle Scouts from Troop 60 in 2017, which is a rare achievement. Since its inception, Troop 60 has graduated 123 Eagle Scouts.

A native of San Jose, California, von Dohlen climbed through the ranks from Cub Scout to Eagle Scout as a young man. He is a graduate of Santa Clara University and is respected in his longtime position as a Deputy District Attorney for the County of San Luis Obispo.

“In addition to the scouts who earned the rank of Eagle, there were many other young men who learned a variety of life skills and lessons under Steve’s watchful eye,” Said Kudija,

Established in 1975, Troop 60 was created by consolidating Troop 62 and Troop 63, which both had their origins in Paso Robles in the 1940s. Troop 60 derives its heritage from these two inaugural troops, continuing its mission to make a difference in the lives of young people, and to develop the leaders of tomorrow. To date, Troop 60 has graduated 123 scouts to the Eagle Scout rank. Troop 60 is proud to be sponsored by the Paso Robles Rotary #1602. For more information on Troop 60, please visit pasoroblestroop60.org or contact PasoTroops60Scouts@gmail.com.