Woman and Sailor Narrowly Escape Being Hit by Bullets

– Gangland guns flashed red in the center of San Miguel early last Wednesday, and when the shots had died away two men were wounded and the little town had been aroused to its greatest mystery in years.

Authorities expressed belief that an attempted hijacking of a truckload of liquor led to the battle, but no rum was found later when the truck was discovered near Lockwood. In the meantime a shot-riddled Cadillac had appeared in Paso Robles and a man who has the name of “Blake” was treated by Dr. G.L. Sobey.

The automobile was still in the Pioneer Garage today—unclaimed. And the whereabouts of its occupants of the morning of the gun battle were still unknown. 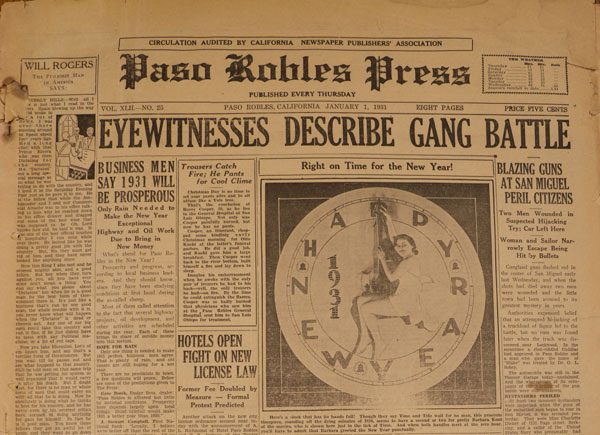 At least two innocent bystanders were imperiled when the guns of the embattled men began to roar in San Miguel, it was revealed yesterday. They were Miss Charlotte Diener of 1131 Page Street, Berkeley, and a sailor of the United States Navy who presumably had been hitchhiking and was given a ride either on the truck on in the other car.

Miss Diener, who had been cooking for the Hotel Bressler, was leaving for the north on Train 69. Fred Braffet, substituting for Bill Williams as night patrolman, had gone to the San Miguel station to flag the train for her.

Carrying her suitcase, Miss Diener stepped into the street. It was 4:40 a.m., and the business section of San Miguel was dark. She started across to the depot.

A truck suddenly swung down the highway and careened to a stop near the old red railroad car which Wm. McNaul placed facing the road a year or so ago. Before Miss Diener had time to reach the other side of the pavement, the Cadillac had circled across the railroad track near the cattle corral and turned near the truck.

Shots rang out. Glass shattered on the Cadillac’s windshield. A man staggered out into the headlights’ glare with one hand over his face. Blood trickled through his fingers.

He took refuge behind the railroad car and leaned against a telephone pole. Out in the street guns were still blazing. Two pistol shots pierced the back of the seat.

There must have been at least one other man on the truck. Now he leaped to the road, a gun in his own hand. More shots at close range. Miss Diener, nearly paralyzed with fright, stood in the middle of the highway and saw the desperate duel.

Over across the railroad tracks, cut off from the highway by a