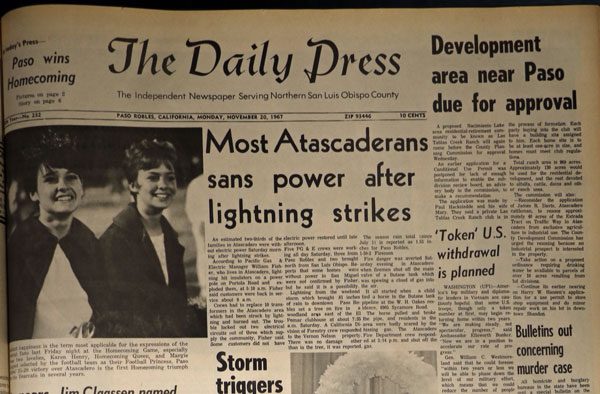 Click here to read the full front page of the Monday, November 20, 1967, The Daily Press.

Miss Livingston was crowned after an exciting and entertaining program, featuring all eight girls in competition, plus a charming intermission show, presented by Nati’s Ballet School.

Receiving the trophy for first runner-up was Miss Karen Henry of Paso Robles. Second runner-up was Janet Cook of Templeton. Miss Laura Lee Huth of Templeton was the recipient of the Miss Congeniality trophy, an award voted by the other girls.

Each girl made a presentation in the performing and creative arts division. Miss Cousins played a piece on the piano; Miss Pesenti presented a fashion show of her own handmade clothes; Miss Monson sang two musical selections; Miss Cook played the accordian; Miss Kathie Henry did a trampoline routine; Miss Huth played the flute; Miss Livingston did a character ballet in authentic costume; and Miss Karen Henry presented an art show of her own work.

A routine featuring all eight girls stressed physical fitness. The routine was planned entirely by the girls. While the girls changed into their formal evening gowns for further competition, a program featuring the ballerinas from Nati’s Ballet Show was presented.

The final stage of the judging saw each girl presented in an evening gown. She was judged on her poise and appearance as she walked across the stage. Miss Carol Wilson, last year’s Junior Miss for Paso Robles, Was introduced as the judges tallied their votes. Included in their consideration was the girl’s scholastic achievement and information gathered from a personal interview held earlier in the day at a reception at the Country Club.

According to Sullivan, the response of the girls was equalled only by the response of Paso Robles citizens who turned out Saturday to make this event a success. It was hoped that each year the contest will grow and become even better.