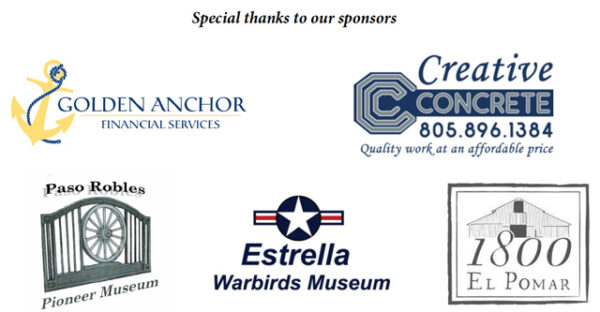 This look back at Paso Robles history comes from local newspapers in the Paso Robles Area Historical Society collection. News for this column is selected with the assistance of the society’s Vice President Nancy Tweedie and Research Director Jan Cannon. Photography of old newspapers by Gigi Greene.

In county jail, Jack Grieg confesses and names two other in series of depredations

With three men held in the county jail, following the confession of one and the implication of two others, well known in the Annette section, Herman Anderson, Paso Robles constable, William Hennessey, deputy sheriff, and Ernest Still, Annette constable, working with Bakersfield officers, Monday succeeded in clearing up a wholesale series of Annette house burglaries of the last four years. 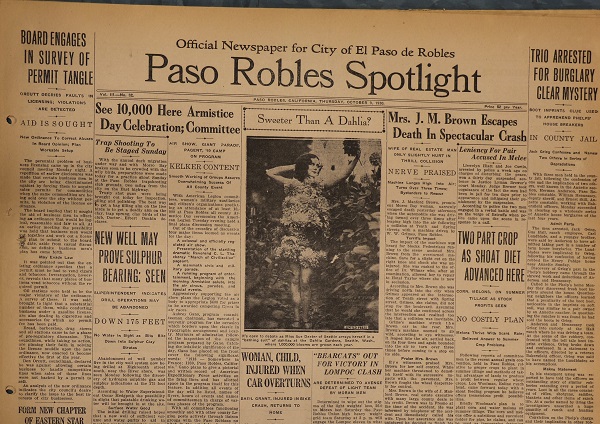 The men arrested, Jack Grieg, Gus Hall, ranch employee, Carl Lundblade, and a younger, were said by Anderson to have admitted taking part in a number of farm house burglaries. The Lundblades were implicated by Grieg, following his confession of having robbed the Henry Phelps home near Annette Sunday.

Discovery of Grieg’s part in the Phelp’s robbery came through the shrewd work and deductions of Anderson and Hennessey.

Called to the Phelp’s home Monday they discovered fresh boot imprints around the  house. Questioning neighbors, the officers learned that a peculiarity of the boot heel, noticeable in the imprints on soft solid, was similar to a pair owned by an Annette rancher. In questioning the rancher, it was found he had sold the boots to Grieg.

Anderson and Hennessey took Grieg into custody at the Hall ranch where he was driving a team. At the scene of the robbery, confronted with the tall tale boot imprint evidence, Grieg broke down and confessed. In a statement to the officers, directed by a veteran Bakersfield officer, Grieg was said to have named the Lundblades as his accomplices.

In his statement, Grieg was reported to have told the officers an outstanding story of similar robberies extending over a period of years. Loot in all the cases consisted of rifles, shotguns, saddles, blankets and other items of ranch life. At a cache named by Grieg the investigators unearthed a huge quantity of ranch and hunting equipment.

Conviction on the Phelp’s charge and their implication in other robberies may result in stiff penitentiary sentences for the trio, according to Anderson.

It was provision day for several San Miguel citizens Saturday afternoon, when scores of sacks of beans were scattered along the main street of town following an explosion and fire in a huge truck and trailer enroute to Los Angeles.

The truck was partially consumed by the fire, believed to have started by grounded motor wires. The driver, one Ball, in a desperate attempt to save his cargo began heaving the bean sacks over the side. The San Miguel fire department responding soon had the fire under control. When Ball attempted to check up on the extent of the fire loss he discovered that about twenty sacks of beans were missing. The trailer was unharmed.

Many of the sacks burst upon striking the pavement. The highway for several hundred feet was littered with beans. 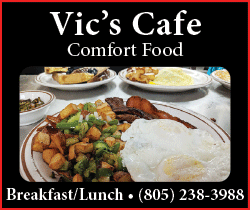