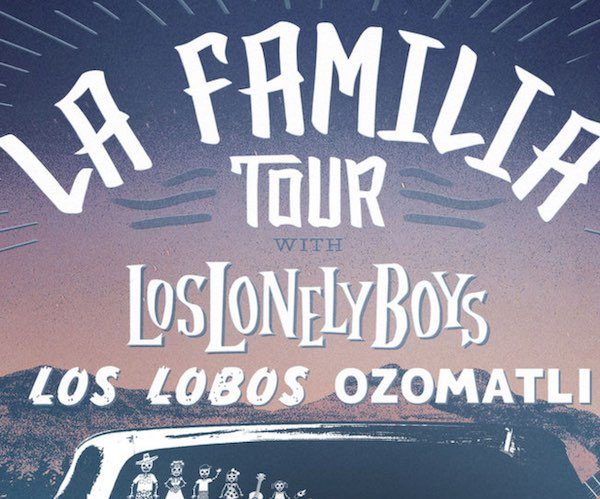 Tickets available online at Ticketmaster.com or charge by phone at 800-745-3000. All dates, acts and ticket prices subject to change without notice. A service charge is added to each ticket price.

Since their breakout 2004 self-titled album, which has sold over 2.5 million copies to date and garnered a Best Pop Performance Grammy for the No 1 hit single “Heaven,” Los Lonely Boys have released four more studio albums, toured all over the world, and performed thousands of shows. Their most recent studio album, Revelation, was released to rave reviews, with the Wall Street Journal calling it “remarkable” and USA Today giving it four stars. The Texican rock’n’roll trio of brothers –Henry, Ringo, and Jojo – continue to prove their musical prowess with their trademark vocal blend, rhythms and songwriting skills.

For over 40 years, Los Lobos, has been mixing Latin with soul grooves, roots rock, Mexican folk, traditional Spanish, blues and R&B. Original members, David Hidalgo, Cesar Rosas, Louie Perez, Steve Berlin and Conrad Lozano (with the additional help of Enrique “Bugs” Gonzalez and Camilo Quinones) play with an invigorating, joyous spirit as they revisit four decades of musical magic. The three time Grammy winning band, Los Lobos, have forged a stellar career unlike any other in the rock, blues or traditional genres by constantly pushing their creative boundaries. The energized performances on “Disconnected In New York City” represent every era of their storied career from “I Got To Let You Know” from “How Will The Wolf Survive?” to their breakout #1 hit “La Bamba” to rarer tracks from their 90’s releases and their last studio album “Tin Can Trust”. Playing with a stripped down ensemble, the recording, although not fully acoustic, shines with a close-knit intimacy.

Acclaimed multi-Grammy winning Latin-fusion institution Ozomatli, takes the band’s street-party consciousness to new heights of eclecticism during their live performances. Their latest release, “Non-Stop: Mexico to Jamaica,” return with an homage to their roots reinterpreting traditional and contemporary Mexican songs using signature Jamaican riddims! The album features a bevy of superstar guest appearances including Juanes, Regulo Caro, Gaby Moreno, and Kyle McDonald (of Slightly Stoopid) plus additional production by famed Jamaican producers Sly & Robbie! Ozomatli formed in 1995 and is known for advocating for farm-workers’ rights and immigration reform. The band has performed in various countries all over the world, including China, Tunisia, Jordan, and Burma.