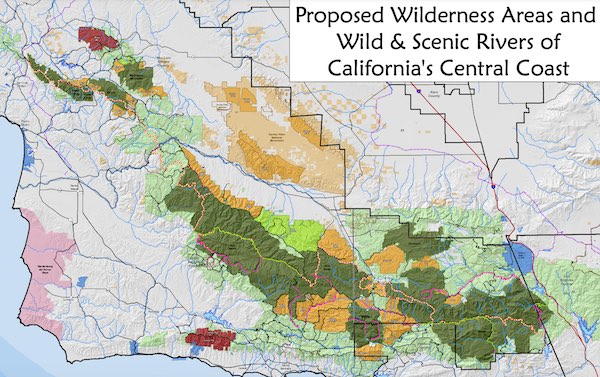 The bill is a companion to Representative Salud Carbajal’s Central Coast Heritage Protection Act, which passed the House of Representatives in February. It designates more than 245,000 acres of wilderness and 400 miles of the Condor National Scenic Trail, and creates two scenic areas encompassing 34,500 acres and safeguards about 159 miles of wild and scenic rivers.

“I’m pleased that Senator Padilla has reintroduced legislation in the Senate that will include Representative Carbajal’s Central Coast Heritage Protection Act,” said Ventura County Supervisor Linda Parks (District 2). “This important legislation will permanently protect valuable wildlife habitat and increase habitat connectivity for imperiled species that live in the Los Padres National Forest, including the California Condor and Steelhead trout. I’m also thrilled about the prospect of having the 400-mile long Condor National Scenic Trail, that would span the length of the Los Padres National Forest, come closer to reality.”

Certain places will be safeguarded from new oil and gas development. The Los Padres is the only national forest in the state with active oil development, and Carrizo Plain National Monument is bordered by some of the most intensive oil development in the country. A new oil well and pipeline were proposed within the monument boundary during the former administration. Future oil drilling will be prohibited on all lands in both regions that are protected by Senator Padilla’s bill.

During the last Congress, then-Senator Harris championed similar legislation that was co-sponsored by Senator Feinstein. Advocates are celebrating the fact that Senator Padilla is reintroducing the bill so soon after taking office, and that Senator Feinstein is co-sponsoring the legislation again. The Central Coast provisions are part of a larger legislative package that will protect public lands and rivers in Northwest California and in the San Gabriel Mountains near Los Angeles.

Both the Los Padres and Carrizo Plain are home to Native American cultural sites and an incredible diversity of plant and animal life. The Los Padres, California’s second-largest national forest, rises from the Pacific Ocean to over 8,800 feet in elevation and provides habitat for 468 species of wildlife, including the endangered California condor and the southern steelhead. The Carrizo Plain contains one of the largest concentrations of threatened and endangered species in the U.S., such as the San Joaquin kit fox and blunt-nosed leopard lizard.

“Over the last year, the pandemic has taught us many things about the importance of access to nature,” said ForestWatch director of youth and community engagement Graciela Cabello, who spoke at the press event for the bill’s announcement. “Our public lands have remained at the forefront of the existing health crisis as places the community consistently turns to for solace, recreation, and other basic needs. We’ve learned that public health and public lands are intrinsically connected, and we must assign them the same value that we attach to other essential needs.”

For Central Coast cities such as Santa Maria, Fillmore, and Carpinteria that have limited parks and open space, the bill protects public lands and rivers that are close by and will increase equitable access to the outdoors.

“With outdoor recreation often privatized, this legislation is a step in the right direction in protecting open spaces and securing everybody’s right to the outdoors,” said Rebeca Garcia, Santa Maria Policy Advocate with Central Coast Alliance United for a Sustainable Economy (CAUSE). “Accessible outdoor spaces are a crucial contributor to improving the overall health of our working class and immigrant families. Communities of color are also often most at risk to unsafe living conditions, and this act will ensure our communities have clean air and water from Los Padres National Forest and the Carrizo Plain National Monument. Thank you to Senator Padilla for fighting for equitable access to outdoor spaces and clean water for our vulnerable communities.”

When it’s safe to do so, locals and visitors to the Los Padres and Carrizo Plain enjoy outstanding recreational opportunities, including hiking, camping, bird watching, horseback riding, kayaking, hunting, fishing, mountain biking, and scenic driving. The legislation would designate the approximately 400-mile long Condor Trail as a National Scenic Trail, the same designation as the Pacific Crest and Appalachian Trails, connecting the northern and southern portions of the Los Padres by a single hiking route.

“Among the many values and ideals that veterans such as myself fought to defend is the protection of our unmatched outdoors for generations to come,” said Vitali Mostovoj, U.S. Air Force Veteran. “Senator Padilla’s legislation offers an important investment to ensure continued access to public lands and rivers on the Central Coast for all. It’s a patriotic call that we cannot afford to miss.”

Prior to the pandemic, the Central Coast was a top tourist destination because of the region’s iconic scenery and world-class restaurants, wineries, and breweries, which yield clear benefits for the local economy. Increased tourism and outdoor recreation opportunities through public lands protections will provide an additional economic boost to local communities, particularly in the area surrounding the Los Padres, as communities work to recover from the pandemic.

Posted in:  State
About the author: News Staff