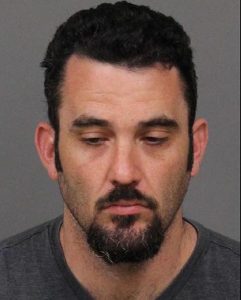 Suspect arrested over a year after the crime

–On Jan. 9, 2016, the San Luis Obispo Police Department responded to a robbery in progress at 1291 Laurel, Laurel Lane Liquor. Responding officers were unable to locate the suspect during the initial investigation. Officers did find a face mask and a toy gun that were both dropped by the suspect as he ran from the store.

In April, 2016, San Luis Obispo investigators began working with the Department of Justice laboratory to process those items for DNA evidence. In June, 2016, a DNA profile was extracted from the mask and a comparison swab was collected pursuant to a search warrant from Benjamin Genova, a 34-year-old Resident of Grover Beach. In February, 2017, the Department of Justice lab matched the DNA extracted from the mask to Genova. The police department worked with the San Luis Obispo County District Attorney’s Office who filed attempted robbery charges against Genova. A warrant was issued earlier this week for Genova’s arrest.

Police officials say this arrest should serve as a reminder that authorities continue to work cases even when an extended period of time has passed.

If you have any information about this crime you are encouraged to call the San Luis Obispo Police Department at 805-781-7312 or Crime Stoppers at 805-549-STOP.