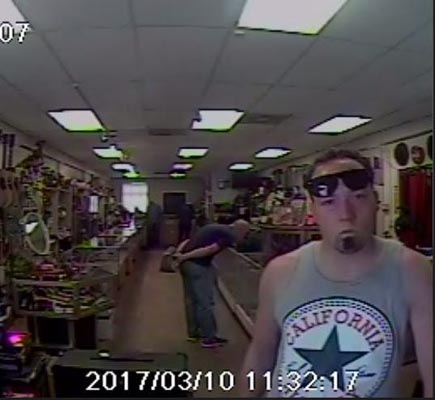 –On March 9, the San Luis Obispo Police Department began investigating a residential burglary that occurred in the 800 block of Mill Road in San Luis Obispo. Shortly after the investigation was started an unknown male suspect attempted to pawn several unique pieces of jewelry believed to have come from the burglary. As a result, investigators obtained surveillance video of the unknown suspect trying to pawn the items.

Late last week Hopkins was arrested in Southern California on new charges of conspiracy. Over the weekend investigators from San Luis Obispo conducted an interview with Hopkins related to this case. As a result of their investigation, the case will be forwarded to the San Luis Obispo District Attorney’s Office for a criminal complaint against him.

If you have any information about this crime you are encouraged to call the San Luis Obispo Police Department at (805) 781-7312 or Crime Stoppers at 805-549-STOP.