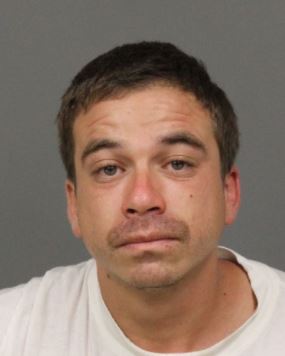 –On Sunday at about 08:04 a.m., San Luis Obispo Police officers were dispatched to the area of the 1800 block of McCollum to investigate a possible subject who used a stun gun on a resident when he was caught burglarizing the residence.

When officers arrived in the area, they located 3 witnesses chasing the suspect in the 600 block of Grand. Officers detained the suspect and he was positively identified as Marcus Anthony Frazier, a 31-year-old transient from Oceano.

It was reported that Frazier was burglarizing a residence in the 1900 block of McCollum when he was caught. Frazier brandished a knife towards the resident and fled out the door, according to police. After several moments, the residents got together and went outside to look for the suspect.

Meanwhile, Frazier had entered another residence in the 1800 block of McCollum and was caught stealing again. This time Frazier used a stun gun on the 69-year-old male resident and ran out the door. The victim received non-life threatening injuries. When Frazier came outside, the residents from the earlier incident saw him and gave chase.

Frazier had some car keys in his possession during the arrest. One of those keys was to a vehicle parked nearby that had just been reported stolen from Atascadero. After further investigation, it was discovered that Frazier may be responsible for additional thefts in the Atascadero area. For additional details contact the Atascadero PD watch commander at (805) 461-5051.

Marcus Frazier was transported to San Luis Obispo County Jail and booked for violations of burglary (2 counts), robbery (2 counts), assault with a deadly weapon, use of a stun gun, possessing stolen property, and elder abuse. He will remain in custody on a no-bail hold.