Original story posted May 27: On May 27, at 12:22 a.m. the Atascadero Police Department responded to a report of an armed robbery which had just occurred at the 99 Cent Store at 7101 El Camino Real in Atascadero. 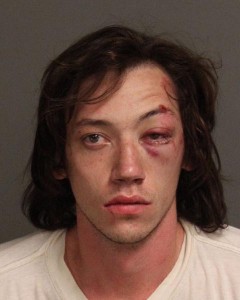 Officers say they spoke with employees and confirmed the suspect was carrying a handgun and had taken an unknown amount of money from the store. Officers reviewed video surveillance and collected evidence at the scene. The victims were not injured in the incident.

Approximately three hours later the suspect was reportedly located walking through the Vons parking lot. Atascadero Police Department officers contacted the suspect, who matched the description and took him into custody. At the time of the arrest the suspect was in possession of a loaded firearm and a large amount of cash.

The suspect was identified as 25-year-old Kyle Kitchin, who was booked at San Luis Obispo County Jail for robbery, possession of a concealed weapon, criminal threats, brandishing a firearm and three outstanding warrants for his arrest.