A Paso Robles man fled from police in a high-speed chase, then fled on foot, was arrested, and fled again after a hospital visit, police report. 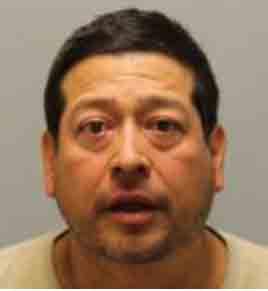 The suspect, 45-year-old Richard Leon Zambrano, was booked into the Paso Robles Police Department’s detention facility on Thursday for driving under the influence of alcohol, evading a police officer, hit and run driving, and battery on a police officer.

The wild series of events began Thursday afternoon at 2:55 p.m. when a 911 caller reported a hit-and-run traffic collision in the area of 11th and Olive streets. The caller said a gold-colored Cadillac Escalade was driving recklessly in the neighborhood and collided with a street sign before fleeing the area.

Officers responded to the area to investigate the collision while other officers started looking for the suspected vehicle. At about 3:04 p.m., an officer saw a vehicle matching this description in the 800 block of Creston Road and attempted to stop it.

The adult male driver, Zambrano, ran away from the vehicle and resisted officers’ attempts to detain him. An officer deployed his ‘Taser’ which immediately caused the suspect to stop resisting, and he was taken into custody without further incident. No uninvolved civilians or officers were injured during these events.

Zambrano was treated at the scene and transported to a local hospital as a precautionary measure. Upon being released from the hospital, the suspect unsuccessfully attempted to flee from the arresting officer prior to being transported back to the police station for booking.