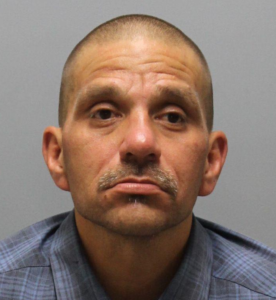 Jesus Chavarria was believed to be under the influence of methamphetamine.

Paso Robles Police Officers were dispatched to Georgia Brown Elementary School around 7:45 a.m. Friday morning after a group of children reported to school officials that a suspicious man approached them and asked if they wanted candy.

Officers quickly canvassed the area and located 43-year-old Jesus Chavarria standing on the corner of 34th Street and Oak Street. The school children identified Chavarria as the man that had approached them.

The Paso Robles Police Department commends the actions of these children and encourages parents to talk with their children about personal safety and awareness. Encourage children to stay alert to their surroundings and immediately contact the police department or a school official if they observe something or someone that appears suspicious.

This investigation is ongoing and any further information should be forward to the department at (805) 237-6464. Persons who would like to remain anonymous and have information about this crime or any others are encouraged to call Crime Stoppers’ 24-hour hotline at 549-STOP or by texting “SLOTIPS” plus your message” to CRIMES (274637).