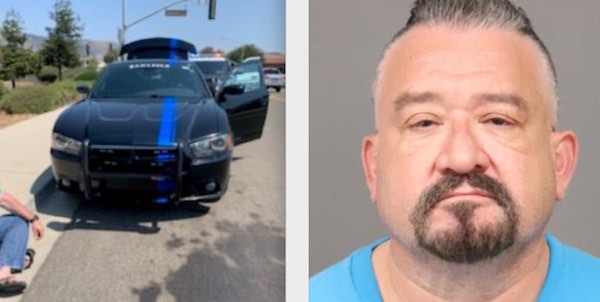 –On Sept. 4, 2020, at approximately 11:15 a.m., the San Luis Obispo Police Department responded to a report of suspicious circumstances near the intersection of Tank Farm and Broad. The reporting party advised dispatch he believed a subject in a vehicle behind him was impersonating a police officer. The subject was attempting to conduct a traffic stop on the reporting party. San Luis Obispo Police officers responded and contacted the suspect identified as Edward Hermosillo.

Hermosillo was driving a black 2011 Dodge Charger equipped with a police-style push bumper and lighting which was inset in the grille. This caused the car to appear like a police vehicle. Hermosillo was also in possession of two collapsible batons which are illegal to possess. A police-style tactical vest and holster were also recovered from inside of the vehicle. No firearms or any other weapons were located.

Hermosillo was booked into the San Luis Obispo County Jail on charges of: possession of a collapsable baton and impersonating a peace officer.

Through further investigation, officers determined there have been similar instances occurring throughout the county with Hermosillo. Anyone who has information or believes they may have been a victim of a similar crime committed by Hermosillo is encouraged to contact SLOPD at (805) 781-7312.