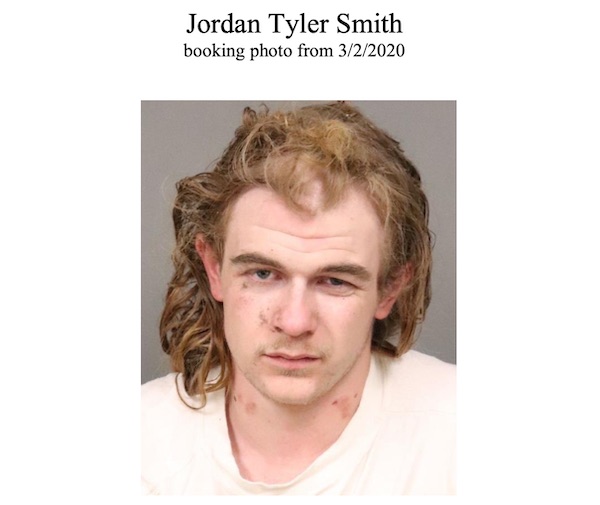 –On Thursday at approximately 11:47 a.m., the San Luis Obispo Police Department responded to multiple reports of a male bleeding in the area of the Bob Jones Trail near Prado in San Luis Obispo.

Officers arrived and located Mato Hayes who had sustained lacerations to his arm and fingers. SLO Fire personnel arrived on scene, extinguished the burning encampment, and provided medical aid. Hayes was transported to a local hospital where he was treated for major injuries.

During the initial investigation, officers identified the suspect as Jordan Smith. Hayes and Smith were involved in an argument over property at Smith’s encampment, police report. During the argument, Hayes lit Smith’s tent on fire, police report. Smith then displayed two machetes and told Hayes to leave the area. Smith then reportedly struck Hayes two to three times with the machetes causing lacerations to Hayes’ arm and nearly severing several fingers. Officers searched the area for Smith, but he was not immediately located.

A short time later, San Luis Obispo Police Department Investigators and the Special Enforcement Team responded to the Bob Jones Trailhead and began actively looking for Smith and talking to witnesses. One witness informed the investigators that Smith was in the creek area.

Investigators located Smith and attempted to contact him, but he immediately began running away from them into the creek. After a lengthy foot pursuit, Smith was taken into custody in the creek area behind the 3600 block of South Higuera without incident.

Jordan Tyler Smith, 23, was arrested for attempted murder, misdemeanor warrant, and a felony warrant. Smith was booked at the San Luis Obispo County Jail and held without bail.

Investigators believe this is an isolated incident and there is currently no threat to public safety.