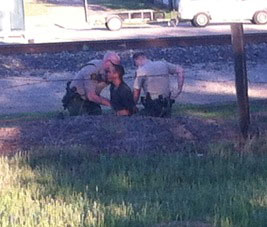 San Luis Obispo County Sheriff’s Deputies arrested a suspect for resisting arrest and drug possession Sunday evening in San Miguel. After a short pursuit and some resistance by the suspect, two deputies took Rocc Dennis Collins, 22, into custody about 6:45 p.m. at River Road and Mission Street.

Sheriff’s deputies had made contact with Collins in regards to an arrest warrant in the parking lot of the Mission Market and Deli, 1402 Mission Street in San Miguel. During the course of their conversation, a deputy noticed a suspicious bag protruding from Collins pants’ pocket, that was later determined to contain methamphetamine and heroin, according to authorities.

When the Deputy began a pat down search of Collins, the suspect ran away but was apprehended about 200 yards away by two deputies. He was booked in County Jail for possession of a controlled substance and one charge of resisting arrest.