Man arrested after returning to KFC location he robbed days prior, police say 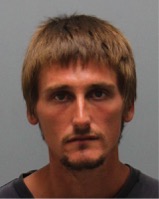 – On August 24, at 10:10 a.m. the Paso Robles Police Department responded to Kentucky Fried Chicken located at 2405 Riverside for a reported burglary. Officers learned from surveillance video that a single male suspect was able to force entry into the business through a window. The suspect removed a cash register from the business and left on foot. On Monday at 5:30 p.m. the Paso Robles Police Department responded back to Kentucky Fried Chicken after employees reported seeing the suspect at the business. Officers arrived on scene and recognized Nicholas Allen Mueller (27) of Atascadero, as the suspect in the surveillance video. Mueller was placed under arrest for a single charge of burglary and transported to San Luis Obispo County Jail.

Anyone with information about this, or other crimes, is encouraged to call the Paso Robles Police Department at (805) 237-6464. Or persons wishing to remain anonymous are encouraged to call Crime Stoppers’ 24-hour hotline at 549-STOP or by texting “SLOTIPS” plus your message to CRIMES (274637). Or submit a Web Tip from the Crime Stoppers website at www.slotips.org.