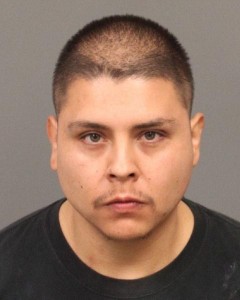 Minutes later, a deputy spotted the car matching the description of the suspect’s vehicle and license plate number. The deputy initiated a traffic stop and as he approached the vehicle, noticed a young female child, later identified as the suspect’s 2-year-old daughter, seated in the backseat without a child safety seat. After witnesses positively identified the suspect, he was arrested without incident.

The girl was placed in protective custody and turned over to Child Protective Services.