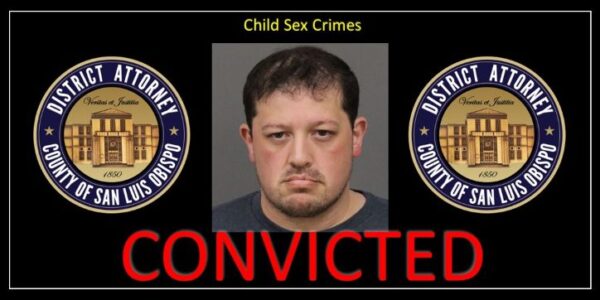 Todd Anthony Hortillosa faces a potential sentence of 120 years to life, plus 2 years 8 months, in prison for his crimes

At the jury trial each of the three survivors, now aged 23, 14, and 11, testified to the prolonged sexual abuse inflicted by Hortillosa. The sexual abuse escalated with each victim, but ultimately stopped after it was reported to a teacher by a then 11-year-old victim.

“We applaud the courage of these young victims to report and testify about what the defendant did to them and we thank the jury for providing justice for these three young survivors,” said District Attorney Dan Dow. “Sexual abuse of children is a horrific betrayal of trust that causes great harm to its victims. We will always do everything within our power to hold child predators accountable to the maximum extent possible.”

A sentencing hearing is scheduled for Aug. 15, at 8:30 a.m. in Department 5 of the San Luis Obispo County Superior Court, the Honorable Judge Craig van Rooyen presiding. Hortillosa faces a potential sentence of 120 years to life, plus 2 years 8 months, in prison for his crimes.