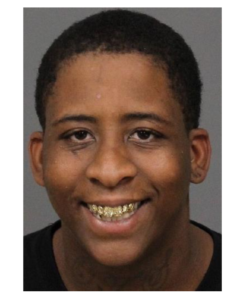 –On May 26, 2018 in the afternoon hours, the San Luis Obispo Police Department (SLOPD) received a call regarding a theft in progress at the Apple Store, 899 Higuera. The caller told dispatchers a male subject entered the store, stole a display model phone and was last seen running east on Higuera from the store. The caller provided a physical description of the subject. A SLOPD bicycle officer was patrolling the downtown area and saw a subject matching the description running near the intersection of Marsh and Osos. After a short foot-pursuit the officer arrested the subject who was later identified as 20-year-old Elk Grove resident Aaron Searcy.

Searcy was found to be in possession of 7 stolen Iphones that had security alarms sounding. He was positively identified by the caller and the Apple Store’s video surveillance. The phones were later returned to the Apple Store and the combined value was determined to be over $7,500.

During the investigation officers contacted Apple’s regional loss prevention team and discovered Searcy was responsible for several similar thefts throughout Nevada and California during 2017-2018 (loss estimated to be over $90,000). A bail enhancement was granted by a San Luis Obispo Superior Court Judge and set for the amount of $500,000. Searcy was booked into the San Luis Obispo County Jail.