Man on quest to visit 21 California Missions by foot 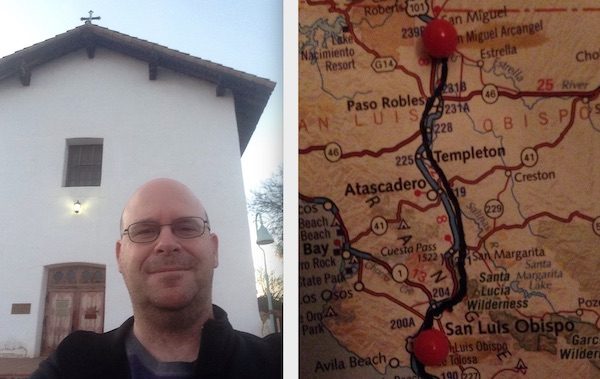 –Christian Clifford, author of three books about Spanish-Mexican history in California, has been on a quest to visit all twenty-one California missions, on foot.

“I am part of a group called the California Mission Walkers,” said Clifford. “We enjoy following in the footsteps of the padres. I’ve visited all 21 missions by car so I thought it would be nice to walk the entire chain, God willing. Being a Catholic school teacher for over twenty years, my hope is to get as close to the lives of the amazing people who were the first Catholics in California—Indigenous, Spanish, mestizo—with the hope of being a better Catholic and teacher.”

Clifford teaches at Serra High School in San Mateo and Saint Patrick’s Seminary & University in Menlo Park. The year 2019 marks Serra High School’s 75th anniversary and the 250th anniversary of the founding of the first California mission at San Diego. You may have noticed him walking our local byways recently. Clifford recently walked from Mission San Luis Obispo de Tolosa (est. 1772) to Mission San Miguel Arcángel (est. 1797). Specifics for his pilgrimage along the California Missions Trail so far are 585 miles walked over 34 days, approximately 222 hours walking, and eighteen missions visited.

Another reason that he is walking is to bring attention to a mission that is close to the hearts of many California mission aficionados, Mission San Antonio de Padua. Founded in 1771 by Junípero Serra, the third of the twenty-one California missions is the remotest and for many a favorite because of its authenticity. “When at Mission San Antonio de Padua the sounds one hears early in the morning are probably the same sounds the friars and Catholic Indians heard nearly 250 years ago. When walking many parts of the California Missions Trail today, it may be hard to connect to the past because of the noise of vehicles whooshing by. At San Antonio, one feels like they are stepping back in time.” Clifford continues that the Mission is in dire need of help. “The government is demanding the Mission to do retrofit repair and a campaign is underway to preserve the structural integrity. This gem must not be lost. Future generations must know of the roots of modern California and the Spanish missions are those roots.”

In addition to bringing attention to Mission San Antonio de Padua, Clifford hopes for people to get to know the founder of the California missions better. “For those who do not know Junípero Serra or would like to get to know him better, I hope they do so by reading the friar’s own writings. The Writings of Junípero Serra are free online through the HathiTrust Digital Library.”

Pope Francis shared on September 23, 2015 in the homily for the Canonization Mass for Junípero Serra, “He [Serra] kept moving forward, because the Lord was waiting. He kept going, because his brothers and sisters were waiting. He kept going forward to the end of his life. Today, like him, may we be able to say: Forward! Let’s keep moving forward!” Clifford says he believes that with every step he takes, he walks with his Catholic ancestors who came before him—in a special way, the Indigenous, Spanish, and mestizo who lived, worked, and worshipped at the California missions.

For more information about Christian Clifford and to read his Notes from the CMT, visit www.Missions1769.com and The Campaign for the Preservation of Mission San Antonio de Padua Foundation at www.preservemissionsanantonio.org.