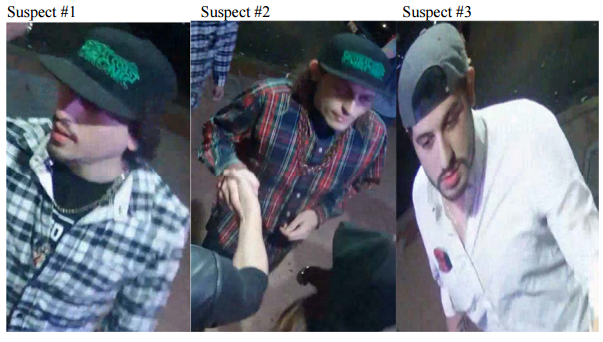 –On July 19, at approximately 12:35 a.m. the San Luis Obispo Police Department received a 911 call of a stabbing that occurred in Bubblegum Alley, located in the 700 Block of Higuera in downtown San Luis Obispo. Officers responded and located one male victim who suffered multiple stab wounds to his upper torso and one stab wound to his forearm. The victim was transported to Sierra Vista Hospital where he was treated for non-life threatening injuries. The victim was released from the hospital later the same day.

An investigation revealed the victim was accompanied by another male subject during the assault. Video surveillance of Bubblegum Alley revealed there were three suspects that physically assaulted the victim, with only one of the suspects stabbing the Victim. It appears there was a dispute or prior altercation that led to the assault.

The first suspect is described as;
A Hispanic male with light skin complexion in his 20’s, 5’-08” tall, average build, with black hair that reaches the mid-neck line, black mustache, wearing a black and white flannel shirt, gold chain and black hat with green writing on it.

The second suspect is described as;
A Hispanic male with light skin complexion in his 20’s, 5’-08” tall, average build with brown hair that reaches the top of his shoulders, no facial hair, wearing a red and blue flannel shirt and the same black hat as Suspect #1.

SLOPD utilizes Nixle as an electronic information sharing system. Refer to http://www.nixle.com. to create an account and receive automatic timely updates and important news. Anonymous information may be referred to Crime Stoppers @ (805) 549-STOP

If you have any information or know the identity of these suspects, please contact the San Luis Obispo Police Department at (805) 781-7317 or Crime Stoppers at 805-549-STOP.