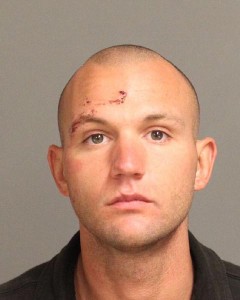 –On Tuesday, at approximately 5 p.m., Paso Robles Police officers were dispatched to the 2100 block of Spring Street regarding a robbery, where they met with a victim who told police that he was struck in the face with a rolling pin and had his cellular phone stolen, according to Lieutenant Ty Lewis.

The victim said he had been having a friendly conversation with the suspect, whom he had met on a prior occasion, when the suspect struck him in the face with a bakers rolling pin. The suspect then took the victim’s cellular phone and fled on foot.

Based upon the victim’s description of the suspect, officers quickly identified a possible match, said Lewis. Officers showed a photo lineup of the suspect, and others, and the victim was able to positively identify the suspect as Garrett Michael Dollens, 24, of Paso Robles.

The next day officers located and arrested Dollens near the 1200 block of Park Street. Dollens was subsequently booked into the SLO County jail on charges of PC 211 (robbery) and PC 245 (Assault with a Deadly Weapon).