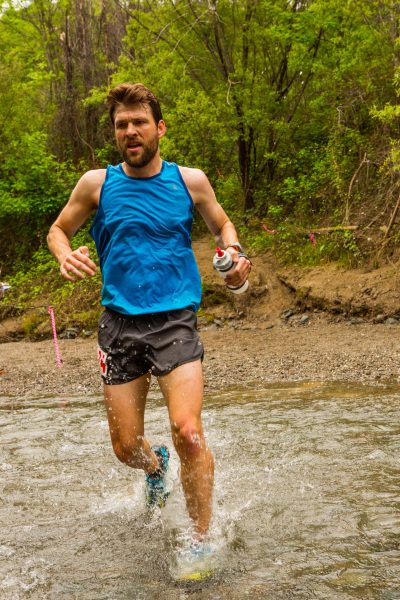 Michael Cordsen on a trail run

–Paso Robles runner Michael Cordsen won a 100-mile race held in Santa Barbara on July 8. Completing the physically demanding race in 22:46 secured Cordsen the win. He took home the much desired Sub 24-hour silver buckle, one granted to the few that had the speed and endurance to sweep the race in under twenty-four hours. In addition, his name, Michael Cordsen, is etched perpetually on a trophy shared by those that had the stamina not only to win the race, but to win it in awesome time against the clock. He said he is proud to be a part of that winners’ circle.

Corden was once a collegiate NCAA wrestler at San Francisco State University where running had little to do with the sport. Eight years on, having hung up his wrestling belt, the call to take up running coursed his veins after a major life event happened – the birth of his son.

With the birth of Cordsen’s son came the realization that he had grown lax in life. Overweight, lethargic, unmotivated, eating the wrong foods, he had become lazy and physically unfit. Mustering up the mental and emotional high spirits he’d felt in his years as a wrestler, he transferred that old energy into new strength and took up running. The first attempt at a healthy lifestyle by jogging for a mere half-an-hour found him disillusioned and physically exhausted. “I was gasping for breath, my muscles were aching, I was headachy, and feeling defeated. It was three days before I recovered from that half-hour run,” he admitted. 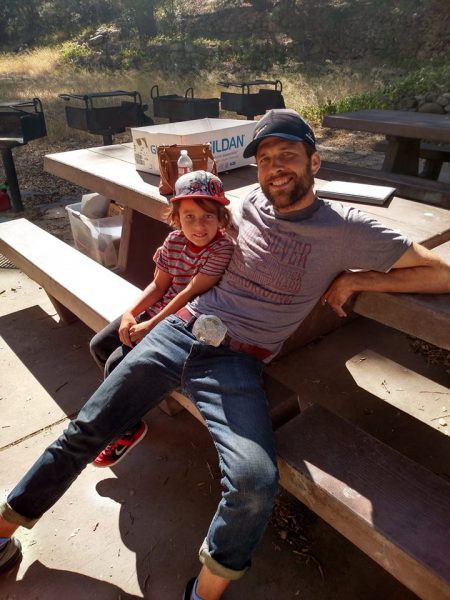 Cordsen and his son, his inspiration back to healthy living

But he did recover and from then on, there was no stopping his devotion to remain healthy. In 2012, Cordsen entered his first race: The Wildflower Triathlon Long Course. Though Wildflower is recognized as the “festival of triathlons,” it was no easy feat to complete the trio of swimming, biking, and running. Though the competition seemed a test set against other athletes, Cordsen grasped that though the desire to win did enter his mind, the real race was against time – the clock – and his biggest competitor was himself. He was determined to finish and he did. Along the road to the finish line, however, he found that the other runners offered him everything in the way of support.

Instead of hoping to outdo each other, he noticed a camaraderie among the racers. “The people involved in running the race were supportive of each other, congratulating one another on their personal and professional achievements, even having conversations and laughing with one another during the race.”

It was eye-opening; that race led to more than a feeling of companionship with fellow athletes. This was the race where Cordsen realized that running, over swimming and biking, was his future. He fell in love with running and that love has become a lifelong affair.

In November of 2013, at the bidding of his boss, Cordsen entered his first marathon trail race at Montana de Oro – the Spooner’s Cove 25K run. Much different than pounding a running track, hard sidewalks, or streets crowded with cars and exhaust fumes, the beauty of nature on the trail runs, the climbing and descent of hills, and the intense distances of which he’d had to endure put him on an endorphin high. The natural elements did not deflate him, stormy or shining, but instead urged him onward.

He was hooked and entered competition after competition including, but not limited to, The Way to Cool 50K, Miwok 100K, Bootlegger 50K, American River 50 Mile, and the Big Basin 50K. The North Face Endurance Challenge 50 Mile race in 2014 and the Ultra at the Quicksilver 100K in 2015 were two of the most demanding races but also two of his most accomplished.

Adding to his already impressive list of achievements, 2016 has seen him skillfully complete the La Cuesta Ranch 50K, the Napa Valley Marathon, Lake Sonoma 50 mile and the Sean O’Brien 100K.

Cordsen’s motivating factor to run, get healthy again, and stick with it stemmed from the desire to get in shape and get healthy for his son and family, and he says he came out the winner.

He is available for seminars and motivational speaking in various venues, happy to spur people on to great health and happy living. Contact Michael Cordsen at his Facebook page Michael Cordsen.