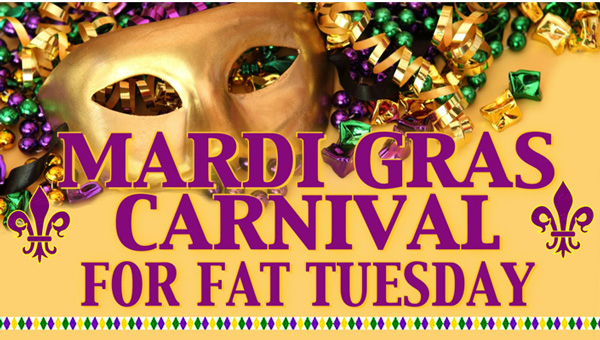 Vision Unida, the Hispanic Business Association and the Cinco de Mayo Scholarship Committee are co-sponsoring a Mardi Gras Fat Tuesday Carnival to recognize three distinguished honorees who have served the Hispanic communities on the Central Coast. This party will help raise funds for youth scholarships. The costume-optional party will be in the ballroom at the Paso Robles Inn in Paso Robles on Tuesday, March 4, from 6 to 9 p.m. There will be food, cocktails, entertainment and a silent auction.

Last year about 100 attended the annual Mardi Gras-themed gathering. The theme was chosen because the groups are primarily Hispanic and Catholic oriented and members celebrate “Fat Tuesday,” the day before Lent begins, said organizer Sue Hubbard. The $30 ticket price includes food and one drink.

The three honorees, one from each organization are, Xelina Rojas from the Cinco de Mayo group, Jeanette Duncan from Vision Unida and Frank Mecham from the Hispanic Business Association. The junior Ballet de Folklorico Cachanilla dancers will start off the program. There will be beads and masks traditional to Mardi Gras available for attendees. There will be a traditional Kings Cake raffle.

Tickets for the event will be offered at various locations throughout the county. Anyone interested in purchasing tickets and /or contribute to the silent auction may contact Richard Benitez at (805) 238-2735 or Manuel Medina at (805) 226-774.

Xelina Rojas, counselor at Paso Robles High School, will be recognized by the Cinco de Mayo Scholarship Committee at the event. Recognition and awards will also be made to Jeanette Duncan, Executive Director of People’s Self-Help Housing, and Supervisor Frank Mecham.

A native of San Antonio Texas, Xelina Rojas moved to California in 1977, after which she received her Masters degree in Counseling from California State Polytechnic University at San Luis Obispo. She has served as a school counselor for the past 23 years of which 17 years were served advising high school students at Paso Robles High School. She also taught English as a Second Language courses within the community of Paso Robles and at Cuesta College for 11 years, utilizing her degree she received in Teaching English to Students of Other Languages from the University of California at Santa Barbara.

Rojas has served as a club advisor for M.E.Ch.A. student club at Paso Robles for the past 17 years, facilitating over 500 students’ attendance at the annual college-level M.E.Ch.A. conference at Cal Poly, over 200 students attending Cuesta College’s “Si Se Puede” motivational conference and sponsoring 20 students in youth leadership training in Santa Barbara with a grant she secured from the San Luis Obispo Community Foundation.

Rojas has served as a conflict mediator and has worked in several capacities to bridge the gap in diverse groups throughout the years. She co-founded the Central Coast Diversity Coalition, MADRE and has served diligently as a member of the Cinco de Mayo Scholarship Committee for the past 17 years working in their fund-raising events and programs for scholarships. She has obtained grants for teen programs through the United Way and the San Luis Obispo Community Foundation also being honored with the Isabel Ruiz Humanitarian Award in 2010.

Supervisor Frank Mecham will be recognized as the ‘Citizen of the Year’ from the Hispanic Business Association.

The county supervisor is the great-great grandson of Joaquin Tomas Estrada, who was the original land grant holder of the famed Santa Margarita Ranch, and elected to serve on the original Board of Supervisors in 1852. His father, Frank H. Mecham was Fire Chief at Fort Hunter Liggett and his mother, Alberta, was a nursing assistant.

Mecham served the community of Paso Robles as a member of the Parks & Recreation Board, as a Planning Commissioner, two years as a councilmember and became the first directly-elected Mayor of that city in 2000. After serving four consecutive two year terms, he was elected to serve San Luis Obispo County as the Supervisor for the First District.

Mecham worked twenty years in the electrical contracting business and for seven years worked for Blakeslee & Blakeslee as a Financial Advisor. In addition to his current elected position as Supervisor, Frank has served as a Board Member for the Twin Cities Community Hospital, Paso Robles High School Technology Academy, Nacimiento Water Commission, San Luis Obispo County Council of Governments, and spearheaded the establishment of the City of Paso Robles’ First Youth Commission.

He spearheaded the Economic Strategy Program that is being utilized Countywide in the planning for businesses and established two process improvement committees that resulted in 17 changes to improve the process for planning and permitting. Currently, he is serving on eight boards in addition to those that he sits on with the other four Supervisors.

In 2004 he was presented with the “Roblan of theYear” award by the community of Paso Robles. A published author, the Supervisor enjoys spending his spare time reading, writing, working in his yard, trying to keep up with his grandkids extracurricular activities and his dogs Jack and Jill.

Jeanette Duncan, who is retiring this year, will be honored at the event. She has served as Executive Director of Peoples Self-Help Housing since 1977. She is responsible for the non-profit multi-county affordable housing agency, with its 30 affiliated non-profit corporations and limited partnerships, which provides a variety of housing and community development programs and residential construction services.

She is the President of The Duncan Group, an affiliate property management corporation which oversees a $300 million dollar portfolio of residential and commercial real estate.

The Peoples’ Self-Help Housing has grown under Duncan’s visionary leadership to become not only a regional but a national leader in affordable housing development. It is one of the most respected and trusted names in non-profits.

The Cinco De Mayo Scholarship Committee is one of three organizations co-hosting the Mardi Gras Carnival. It provides financial support to graduating seniors from Paso Robles High School in the form of scholarships for education beyond high school. The Cinco de Mayo Scholarship Committee de Paso Robles encourages the participation of the community to help fundraise for scholarships, promote Latin cultural awareness, and build community through sharing information and resources.

It was founded 24 years ago by a group including Richard Benitez, Sally Mason, and Joe Quiroz of the Paso Robles School District and other community members who wanted to encourage local youth to pursue higher education. This is a group of local educators, professionals, students, business leaders, and community members who share their time.

Hispanic Business Association is a co-host

The Hispanic Business Association is participating as a co-host of the Mardi Gras Carnival. The primary purpose of this group is to provide a network of businesses in the Paso Robles area which serve the Hispanic community on a regular basis.

The idea of the Hispanic Business Association began in January 2011 with Sue Hubbard in response to multiple inquiries from her Spanish-speaking clients asking for assistance locally in finding various types products and services where the businesses understood Spanish and the Hispanic culture. She eventually found a small core group of business owners and representatives that saw the same need and were willing to develop a service group for Hispanic businesses and the population at large. The group agreed to hold a monthly meeting and offered the idea of the network to their clients, friends and business associates.

The Hispanic Business Association holds a monthly meeting in which there is a time segment for networking, a keynote speaker addressing one of the many topics and issues facing the Hispanic community and Hispanic businesses on the central coast, and an information session where members can announce upcoming events of importance.

Vision Unida is a co-host of event

Vision Unida is one of three organizations which are hosting the Mardi Gras Carnival. It is a non-profit organization formed in 1994 by a group of individuals interested in increasing the participation of Hispanics and other underrepresented communities in the civic affairs of the central coast of California. An educational program was developed, dedicated to facilitating the leadership development of the diverse local population. The program, The Community Building Institute, is a 13-week course consisting of one evening session each week at Cuesta Community College. Session topics range from education on personality traits, time management and resource development to developing the leadership skills necessary for addressing community issues.

Vision Unida offered for the first time in 2009, twelve $500 scholarships to Hispanic graduating high school seniors who plan to continue their education at either a 4-year university, 2-year community college or a trade/vocational school. Graduating students must have at least a 2.5 grade point average, show financial need, have prior community service and submit an essay in order to be considered.