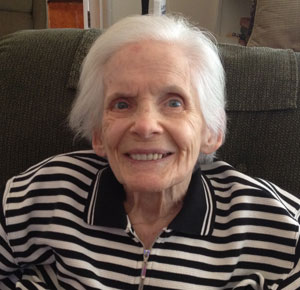 Margaret Esther Bailey (Brown), age 90, passed away Saturday, July 26th, 2014 from complications following a recent stroke. Maggie, although a longtime resident of Colorado, was born and grew up in Paso Robles, California.

Born in 1924 to Joseph F. and Alice (Exline) Brown, Maggie was preceded in death by her seven siblings: Elmore, Exline, Joseph C., Ernestine, William, Henrietta, and Joelle. She always felt great pride at being the granddaughter of Paso Robles pioneers William Henry Exline and Harriet Esther Warner Exline who settled there in 1882, and Maggie took her middle name from Harriet who was a mentor and remained an important influence throughout Maggie’s life.

Maggie graduated in 1941 from Paso Robles High School, and in 1943 married Robert W. Bromm in Greenfield, California. In 1944 Maggie had her first child, Donna, in Atascadero, California; and after moving to Colorado, she gave birth to her second child, Robert, in 1950.

Maggie met her second husband, Calvin Kennedy, in Denver and was married to him in September of 1959, having her third child, Wayne, in 1961. Margaret married her third husband, Robin B. Bailey, in June of 1972 and with him eventually moved to La Jolla, California. Subsequently Maggie lived in Los Osos, California; Seattle, Washington; and finally Longmont, Colorado, where she spent the majority of the last twenty years.

Maggie is predeceased by Robert W. Bromm and Robin B. Bailey, and is survived by Donna (Bromm) Layton of Diamond Springs, California; Robert D. Bromm of Richmond Hill, Georgia; and Wayne Kennedy of Erie, Colorado.

Maggie will be remembered for a quick wit and her sense of humor. She loved music all her life, playing in the family dance band throughout her childhood, and taking pride in being named solo clarinetist at Paso Robles High. She loved the mountains of Colorado as well as the ocean of California, and flowers of all kinds. She loved to travel, and never missed an opportunity to share a good meal with her family or a margarita with a good friend.

She was a die-hard Denver Bronco’s fan and watched every game and knew the details about every player. She was also a Colorado Rockies fan and watched their games whenever she could. Maggie was an animal lover and doted on her pets. She was a loving mother, and without a doubt, dearly loved and took her very greatest joy from her 8 grandchildren and 21 great-grandchildren.

At Margaret’s request, there will be no service. Tucked in an envelope, however, she did leave three copies of this poem — one for each of her children. We’ll miss you, Mom.

Do not stand at my grave and weep;
I am not there. I do not sleep.

I am a thousand winds that blow;
I am the diamond glints on snow.
I am the sunlight on ripened grain;
I am the gentle autumn’s rain.

When you awaken in the morning’s hush,
I am the swift uplifting rush
Of quiet birds in circled flight.
I am the soft star that shines at night.

Do not stand at my grave and cry.
I am not there; I did not die.