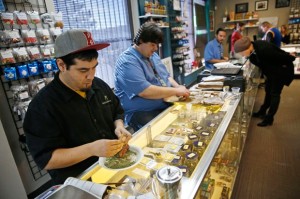 Employees roll joints at the Medicine Man marijuana dispensary in Denver, as it prepares to open as a recreational outlet. Photo from US News and World Report.

There may be as many as four ballot measures for voters to consider in November, according to a recent article by US News and World Report . Each of the four propositions would legalize the drug for adults over age 21 and authorize recreational sales.

The most radical proposal – the California Cannabis Hemp Initiative – would allow residents to grow 99 flowering marijuana plants and possess up to 12 pounds of cannabis.

Mark Newcomb, one of that initiative’s organizers, tells U.S. News approximately 200,000 signatures have been collected so far. Organizers need to collect a total of about 500,000 by Feb. 24.

Newcomb says 1,000 volunteers and 300 paid canvassers are helping out. He sees California as a possible pioneer in cannabinoid medical research and scoffs at more timid legalization bids.

Supporters of the three other proposed initiatives – each offering different specifications – have not started to collect signatures.

State Attorney General Kamala Harris’ office approved the wording of the Marijuana, Control Legalization & Revenue Act – which would allow residents to grow 12 plants – in December, saying it would save the state in the low hundreds of millions of dollars annually. But organizers are refiling their wording, which may be reapproved by Jan. 31, the San Francisco Chronicle reports.

Another proposal, offered by the Drug Policy Alliance, is modeled on Washington state’s law, but unlike in Washington – where possession is legal but personal cultivation is not – the initiative would allow six marijuana plants per residence.

Source: US News and World Report