Marines donate time and effort to a local mission 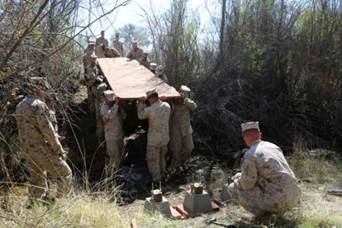 Marines and sailors with the 11th Marine Expeditionary Unit transport a prefabricated bridge over a creek during a community outreach project near Fort Hunter Liggett, Calif., March 22. Chaplains with the 11th MEU coordinated volunteers from the unit’s major subordinate elements to help beautify a walking path belonging to Mission San Antonio.

Mission San Antonio, founded in 1771, is situated on an expansive piece of land where visitors can enjoy a meditation trail as part of the mission’s retreat program. Chaplains from the 11th MEU coordinated volunteers from the unit to help make that walk more pleasant by creating easy passage across the property’s creek and clearing a more defined walking path.

“Part of the mission of not only the MEU but the entire Marine Corps is to make an impact,” said Lt. Cmdr. Joseph Wilburn, chaplain, 11th Marine Expeditionary Unit and an Augusta, Ga. native. “Instilled in the training of a Marine is to come into an area and to make improvements either by using the passion and desire they have to defend the country or by drawing upon that same passion to help people in need wherever they can identify that need.”

Wilburn believes this experience will apply specifically to the MEU’s upcoming deployment.

“When we get into areas where we believe we should make a very significant impact, such as places like Djibouti, where there’s such tremendous poverty, we hope to be able to formulate some humanitarian partnership missions,” he said. “We want our chaplains to be able to identify opportunities, and this has helped us to come out here in the same training environment we’re already in and identify this project and also in the future give these same Marines the opportunity to enter into an environment like Djibouti and do something very positive.”

As RUTMEUEX is the first large-scale integration of all the major subordinate elements of the 11th MEU, it serves as a valid training opportunity for the religious ministries program heads to align as well.

“This is really the first major opportunity we’ve had to come together as a religious ministry team composited as the 11th MEU,” said Wilburn. “So we’re drawing upon the same training opportunity everyone else is having and forming up our team together. Each of us is finding that established cohesion that’s going to propel us on through the deployment.”

While the MEU’s priority during the pre-deployment cycle is operational training, this community outreach event happens to be the third of its kind executed by the 11th MEU. According to 1st Lt. Thomas Morton, engineer platoon commander, Combat Logistics Battalion 11 and an East Bridgewater, Mass. native, it shows the importance of making a positive impact on their surroundings.

“We appreciate the opportunity and we appreciate all the support we got from the command,” he said. “Maybe next time when the 11th MEU comes out here, they can get involved again and help them out in another way. They seem very thankful for the opportunity to have us out there.”

The Marines and sailors at work also felt a keen sense of honor to be able to apply their skills in such a charitable capacity.

“It shows that we care and we’re always willing to come out and help others,” said Lance Cpl. Roberto Carballo, an avionics technician with Marine Medium Tiltrotor Squadron 163 (Reinforced) and a Houston native. “It felt good to be able to get out of my daily routine and get to see the scenery here on Fort Hunter Liggett and contribute and help the people out here.”