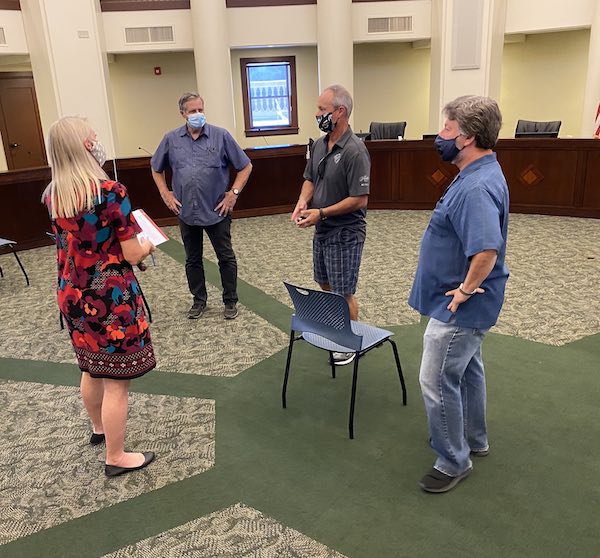 –Saturday night, the Martin Paris Band will ‘rock the Rotunda’ in a live performance carried live on KPRL radio station.

Martin Paris was scheduled to perform on the stage next to the Atascadero Pavilion as part of Atascadero’s Summer Concert Series, but the pandemic changed those plans. Assistant City Manager Terrie Banish came up with the idea to have the band play live with no audience, but broadcast the performance live on the radio at 6 p.m. Saturday night.

Martin Paris, some of the band members, sound people, Chad Stevens of KPRL, and Banish met at the Atascadero City Hall Rotunda to strategize to plan for the live event.

The performance will be carried out live over a broadcast line which KPRL uses to transmit the Atascadero City Council meetings. There will be no live audience in the rotunda Saturday night, but rumors are that Mayor Heather Moreno may stop by. “Hey,” the mayor told Terrie Banish. “I like to dance. Even if I’m dancing by myself.”

The live performance is scheduled to last an hour. Martin Paris will play a variety of popular music from the past several decades.

If it goes well, it may be a weekly event for Atascadero, “Rocking the Rotunda.”