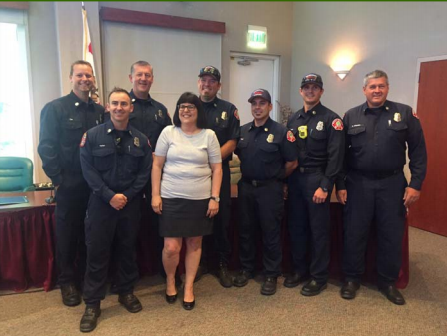 –On June 27, Mary Baron took the oath of office marking the official start to her promotion to Emergency Services Coordinator. The oath was given by City Manager Tom Frutchey, and allowed Baron to rededicate herself to the City of Paso Robles, and her community.

Interim Chief Garcia and Battalion Chief Gallagher, as well as many of the department’s captains, firefighters and paramedics, attended the swearing-in ceremony in support of Baron.

Baron has been with the City of Paso Robles for three years and previously held the position of Administrative Assistant II, prior to her promotion.

Baron has proven herself to be a valuable asset to the city and the Emergency Services Department, always willing to take on any task or challenge, and has been awarded an Employee Recognition Award in the past for her generosity and selfless acts throughout the community.

Baron looks forward to many more years of service and says she is humbled by this opportunity.