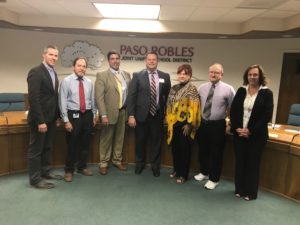 The appointment is provisional. Unless a petition calling for a special election pursuant to Education Code 5091 is filed in the Office of the San Luis Obispo County Superintendent of Schools within 30 days of this provisional appointment, it shall become an effective appointment.

McClish said, “I am excited. My whole family is in education and it’s in my blood. I’m looking forward to working and helping. My son is starting TK next year and being able to be a part of that is exciting. Our new daughter is a ways out from school, and it exciting to be part of the education here.” McClish and his wife, Karisha Dearing, welcomed their new baby daughter on Sunday.

Board President Field Gibson, said “On behalf of the Board of Trustees, we are happy to announce that Matt McClish has been provisionally appointed to the school board.  Matt will fill the seat vacated by Dave Lambert until the next general election in November of 2018. At that time there will be an election to complete the remaining two years of the seat. We appreciate the interest of all nine of the candidates that applied to be provisionally appointed and the time they volunteered in going through the intensive interview process.”

Supervisor Chris Williams said, “On behalf of our Board of Trustees, we are thrilled to welcome Mr. McClish to his new role.”

McClish is the General Manager for Kennedy Club Fitness and the Chairman of the Executive Committee of the Paso Robles Chamber of Commerce. Originally from Laguna Niguel, McClish studied at Cal Poly and his family live in Paso Robles. The trustee seat McClish is filling will be up for re-election in Nov 2018.