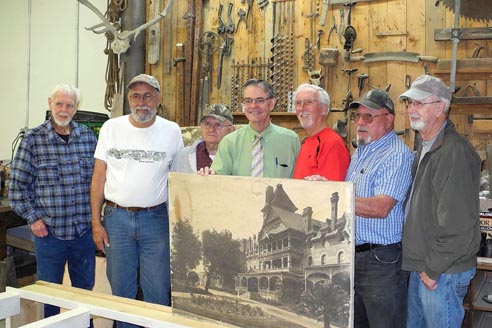 Paso Robles Mayor Steve Martin poses with the Pioneer Museum team working on a scale model representation of a portion of the front of the original Paso Robles Inn.

–The year-long Mayor’s Museum Tour continued on Wednesday, Feb. 10, as Paso Robles Mayor Steve Martin visited the Pioneer Museum on Riverside Avenue in Paso Robles. The highlight of the tour was the introduction of the museum team working on a scale model of a portion of the front of the original Paso Robles Inn, which was destroyed by fire in 1940. The 1/3 scale reproduction will be installed on the back wall of the museum and will give visitors a real-world representation of what the stately building was like.

“This is an amazing project,” said Mayor Martin. “For many years all we’ve had to remind us of the original Paso Robles Inn were old photos. This will bring history into the present and revive one of the iconic structures of Paso Robles.”

Admission to most of the museums is free. More information on each can be found on the NCHC web site, www.nslohistory.org.

The next tour will be hosted by the Templeton Historical Society on Wednesday, March 9, 10 a.m.