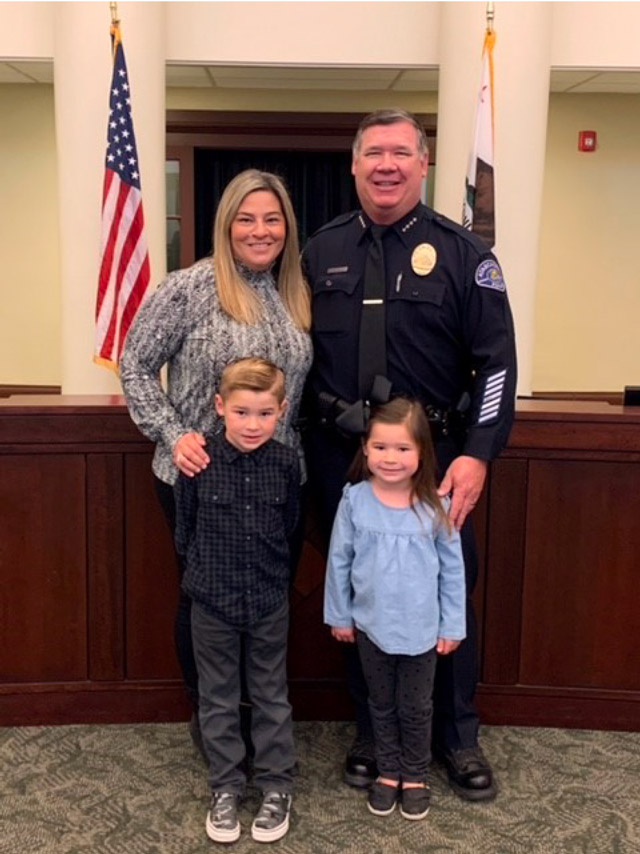 Taken after Chief Masterson’s Oath of Office and Badge Pinning Ceremony, with his
wife and children, in the Council Chambers at Atascadero City Hall.

When former Police Chief Jerel Haley announced his plans for retirement last year, after taking a few deep calming breaths, I knew that I was going to have to find just the right candidate to take over that role when he left. The position of Police Chief is a critical one, not only to the City and to the Department, but also to the entire community.

After a thorough, nationwide recruitment process, including in-depth, 4-panel interviews and background checks, I was extremely pleased that we were able to locate just the right professional to take over the position. The finalist who came out on the top of our list of candidates was Chief Robert (Bob) Masterson, who at the time was serving as the Police Chief in King City, and he lives right next-door, in Paso Robles. Chief Masterson began his new role here in Atascadero in January.

Bob was the perfect find to take over the demanding lead role at the Atascadero Police Department. He is committed to continuing the professional development of our officers, and ensuring that high standards of conduct are a priority. He is a professionally recognized police executive with over 34 years of experience and he has the leadership qualities and experience I was looking for. He also has a proven background in community outreach with a history of building community relationships and business partnerships to foster trust and cooperation between the members of the Police Department and the community.

Our new Chief first began his law enforcement career with the Tulare County Sheriff’s Department, where he was hired in 1986 as a Deputy Trainee, progressing through the ranks to the position of Police Lieutenant. While there, he served key roles including that of detective, internal affairs sergeant and leader of the gang suppression unit. After leaving the Tulare County Sheriff’s Department, Bob became the Director of a faith-based non-profit organization providing gang prevention and other services to at-risk youth, and then was Chief of Police for the College of Sequoias Community College District, receiving their Administrator of the Year Award.

Beginning in 2016, Bob served as Police Chief for King City, where he played an integral role in their Comprehensive Plan to End Youth Violence, with highly dramatic results in reducing gang violence and improving crime statistics. He successfully led advancements in the King City Police Department, improving community relations as well as department morale, and turning the department from dysfunction into a professional organization, receiving high marks from King City management for his tremendous performance and achievements within the department, their community and the city. In recognition of those efforts, he and the department received a Congressional Commendation Letter for violent crime reduction, together with State Assembly and Senate letters of commendation for milestone achievement.

In part, Bob was originally drawn to Atascadero by his connection with Atascadero Bible Church (ABC). He tells me that he looks forward to becoming even more connected with our community and plans to be out of his office as much as possible, attending events, stopping in to introduce himself to local business owners, and to just generally be visible in town while getting to know everyone. He also plans to continue the Police Department’s special enforcement unit that helps work with our local homeless population and hopes to expand the outreach to those unhoused residents to help them get more of the services they need.

I feel we were extremely fortunate to have Bob accept the Chief’s position here in Atascadero, which is a little closer to home for him and is working out very well for us all. He’s been here for two months now and is fitting in great, both at the Department and as a member of the City’s Executive Management team, as I had every confidence he would. If you get a chance, please join me in welcoming Chief Bob Masterson to our community.