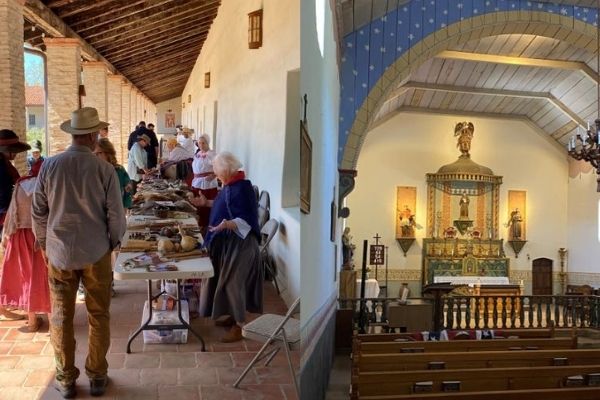 Exhibitors and the mission sanctuary.

In 1771, Padres Junipero Serra, Miguel Pieras, and Buenaventura Sitjar hung bells on the branches of an oak tree, and established the third mission in California. Fathers Pieras and Sitjar stayed behind with a small group to start the mission on July 14, 1771. Thus began Mission San Antonio de Padua.

It’s located in a remote area that was once a part of Hearst Ranch. Unlike many missions, which saw cities grow up around them, the land around Mission San Antonio remains pristine. One can still see the remains of original mission structures. Although it fell into disrepair after Mexico secularized the missions in 1824, in the 1900s, people often visited the mission for picnics or to conduct outdoor religious events. In the late 1940s, the Franciscans worked with William Randolph Hearst to restore the mission.

Several times each year, Mission San Antonio celebrates its heritage with Mission Days, The Fiesta, Cutting of the Roses, Las Posadas, and Evening in the Garden. Those annual events attract visitors to the mission. The mission is also available for groups and individuals for retreats. 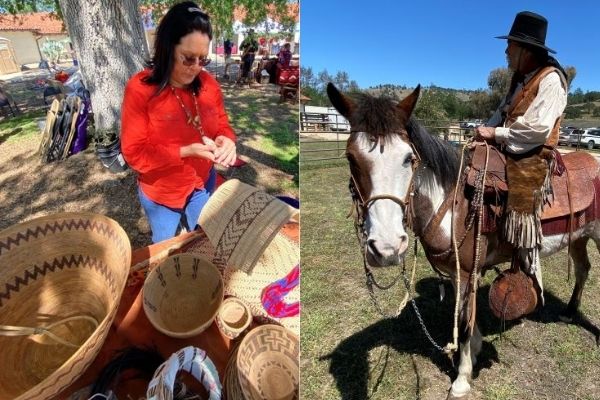 Saturday’s Mission Days attracted hundreds of people from throughout the Central Coast and San Joaquin Valley. Some traveled from the Bay Area and Los Angeles to attend the event. Musicians performed period music in costume. Native American displayed baskets made during the Mission period. A Chukchansi woman brought baskets made by her ancestors in the late 1800s. Other reenactors showed how people dressed and worked during the 1800s in California.

Mission Administrator Joan Steele said the weather cooperated, “Thursday, it was 20 degrees warmer. Today, the weather was perfect. We’re glad so many people turned out to see the mission. This is our reenactment. People also got to see our new garden, which is restored with all native plants. Mission Days turned out beautifully.”

The next big event at Mission San Antonio is the Fiesta, scheduled for July 12, 2022.