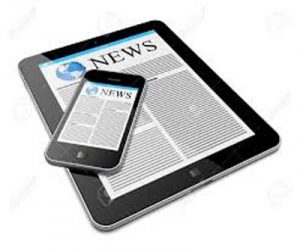 A recent Pew Research Center survey found an acceleration in the use of mobile devices for news over the past three years, as fewer Americans relied on newspapers.

The portion of Americans who get at least some news on a mobile device rose to 72 percent in 2016 from 54 percent in 2013, the report said. That included 36 percent who said they “often” get news from a smartphone or tablet.

The survey confirmed the trend toward digital and mobile while offering a grim outlook for the newspaper sector, which is failing to connect with young adults.

News still is important to Americans: More than seven in 10 follow local and national news closely, and 65 percent monitor international news with the same regularity.

Fully 81 percent of Americans get at least some of this news through websites, apps or social networking sites, with the mobile share growing.