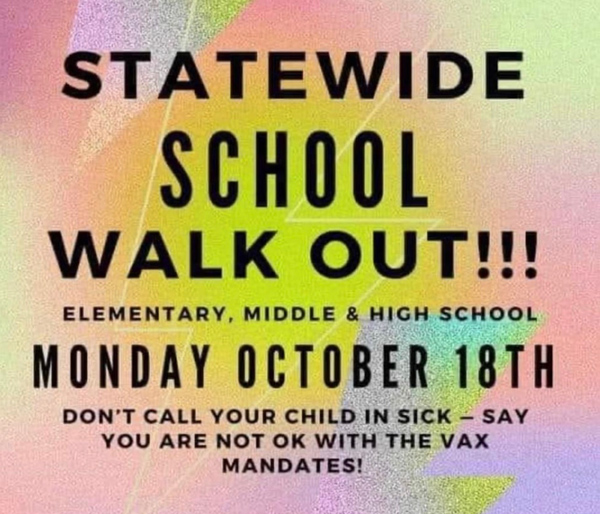 –The Paso Robles Unified School District reported on Monday afternoon that about 1,000 students more than usual were absent from school.

The absenteeism follows a call for a “Statewide School Walkout” to protest mandatory COVID-19 vaccinations for students.

On Oct. 1, California Gov. Gavin Newsom announced an emergency order that said the state will require the COVID-19 vaccine for students in the next school term following FDA approval for school-aged children. That could be as soon as Jan. 1, 2022. The COVID-19 vaccine will be added to a list of 10 other vaccinations required for children to attend school in the state.

Paso Robles Unified School District Deputy Superintendent Jen Gaviola said, “We did see an increase in absenteeism today.” There were roughly 1,780 students out today, she said. “An average day this year would have 760 students out.” The district’s total student enrollment is 6,567.

That means about 27-percent of enrolled students were absent on Monday.

“The extensive absences today showed how much opposition there is to the vaccine mandate, but at the cost of a considerable loss of revenue to the district and loss of yet more instructional time for students,” Superintendent Curt Dubost told the Paso Robles Daily News.

“I fully realize the point that is being made,” he said. “I do applaud the position some parents took, which was to send a letter of protest, but still send their kids to school. I’m sure particularly at the secondary some of the absences may also have been due to students using it as an excuse to simply skip a day of school.”

“Many parents though confirmed this was a protest of the vaccine mandate,” Dubost said.

“I look forward to a time when our focus as a district can return to early literacy, algebra readiness, and kids learning more swiftly to speak and write English fluently.”

The walkout was reported in many school districts throughout the state including Southern California, Fresno, and a protest of more than 1,000 people in Sacramento. About 200 people protested outside the San Luis Obispo County Health Department, the SLO Tribune reported.

Editor’s note: This story was updated to include comments from Superintendent Curt Dubost.