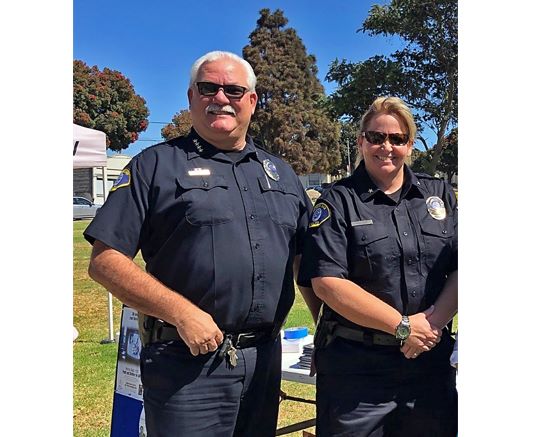 – The Morro Bay Chamber of Commerce sponsored an online Zoom program by the Morro Bay Police Department offering a variety of safety tips and other information for area businesses. Morro Bay Police Chief Jody Cox and Commander Amy Watkins spoke for an hour via Zoom and the session was recorded to be available for businesses to view later.

Chief Cox opened with a discussion on video surveillance saying that businesses should consider purchasing a system. He mentioned Aldi, SimpliSafe, Vivint, and Ring emphasizing that Ring only costs about $100 to purchase. Systems like this can be very helpful to the police when an incident is reported by a business. Cox also said employees should be instructed to be aware of the surroundings and be able to provide information such as the location, description of a possible subject. The problem that occurred, and whether any weapons were involved.

Cox mentioned that there have been issues for shops and offices with the transient community and said that it is important to notify police if a business owner or employee is uncomfortable and feels that there are people loitering who are not their usual customers. “Call us if you see suspicious activity. But don’t call just because someone is walking in the neighborhood,“ he said. Cox also said that transients often will act differently once police have contacted them a few times. He suggested not to call 911 unless it is a true emergency but to call the listed phone number for the police station. In Morro Bay, that number is (805) 772-6225.

Interesting statistics are in the Morro Bay Police Department’s Annual Report and Cox reported on some of them. In 2020 his department had 1,250 calls per month which amounted to about forty-plus calls a day and this averaged 130 calls more than other coastal towns. There were also 50 arrests per month. So far in 2021, the department has received 70 calls per month and made 60 arrests per month. This is averaging to 204 more calls than other area towns receive. There seems to be no explicable reason for this other than the fact that Morro Bay is a tourist town and attracts more people to it including transient homeless individuals. Homelessness is an increasing problem for all towns on the Central Coast.

Cox emphasized the need to educate business owners and employees and residents regarding laws that govern the request for compliance when officers are called to an event, trespass, loitering, blocking sidewalks, etc. This would help if there were a necessity to call the police on the part of the business.

Some of the crimes reported deal with panhandling, shoplifting, causing a disturbance, theft, or the use of weapons. Often officers will come out and will provide a warning to the person causing the problem or give them a citation or arrest them. Morro Bay police can detain a suspect and will investigate but since they have no holding cells, they might release the subject or cite them, or arrest them and take them to San Luis Obispo County Jail. The county does not take misdemeanor actions so in these cases they ticket the subject and release them. Cox reminds everyone that not everything we might find unpleasant is against the law.

A major problem for law enforcement is businesses that call for police action and then refuse to prosecute. Reasons for not prosecuting usually are due to the need for the business owner to appear in court. This Cox says encourages more theft as once individuals discover no prosecution, they often continue to attack the same business. He advises areas that see constant problems institute a neighborhood watch program with other businesses and post signs.

Commander Amy Watkins spoke about the Neighborhood Cop Program that is available as an App on cell phones. This is an effective way to learn about an area’s sector officer assigned to that neighborhood and get to the officer or officers. The App gives people the ability to register an anonymous tip, send photos, and report any troublesome issues. This information comes into her, and she sends out the sector officer to investigate. Members can also look at the Weekly Police Log and the Crime Map.