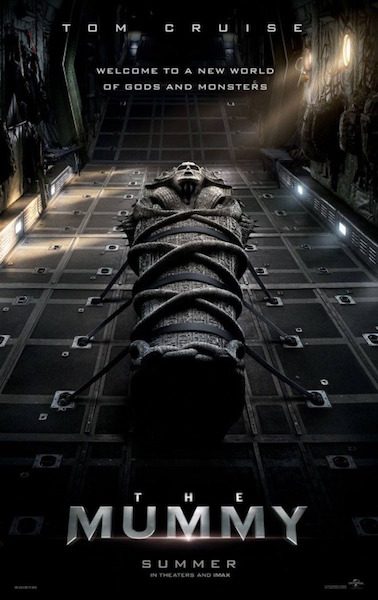 –In 2017, it’s no longer good enough to make a successful film. You have to aspire to more. We are in the era of film franchises, and we’ve already seen it this summer. The fifth “Pirates of the Caribbean Movie,” the sixth “Alien” film and in April we saw the eighth “Fast & Furious” movie.

Universal decided it could have a film universe of its own. Long ago plans for a re-make of “The Mummy” were announced. But in late May, three weeks before its release, Universal upped the ante by announcing its Dark Universe series. “The Mummy” was the start of a new franchise.

The hope was that would spark fan interest. But middling reviews and boring trailers didn’t lead to much buzz, as “The Mummy” fell flat in America with just $31.7 million on opening weekend despite the star power of Tom Cruise and Russell Crowe.

And for good reason. Despite the talent and studio hopes, this is a bad and unnecessary re-make. And if it’s the precursor for what’s to come, the Dark Universe should stay hidden.

This new “Mummy” picks up in Iraq. While the war continues, a pair of scouts for the U.S. military, Nick (Cruise) and Chris (Nick Johnson), are supplementing their future as treasure hunters. Their quest leads to a remote village, where a clash with rebel forces leads to an air strike that uncovers a hidden tomb.

After a tongue lashing from their commander (Courtney B. Vance), Nick and Chris are dispatched into the tomb with an archeologist named Jenny Halsey (Annabelle Wallis) who is part of a group charged with protecting ancient treasures. They find a tomb buried deep that they unearth and take with them.

Things don’t go according to plan. Chris is stricken with something, and soon natural phenomenon bring down the plane. All are feared dead, though Nick is able to get Jenny out via parachute.

Back on the ground, Nick is decidedly not dead, but something curious is afflicting him. It doesn’t take long to realize it’s part of a curse from the mummy that was found entombed, Princess Ahmanet (Sofia Boutella), who made a deal with a demonic God and is now hoping to return and finish the job.

I remember when “The Mummy,” starring Brendan Fraser, debuted in 1999. It was a fun, funny, B-Action movie. It spawned two sequels and a spin-off over the next decade, and all of them were a light-hearted mix of classic monster movies, action and comedy. And casting played a key in that.

I was weary when I heard “The Mummy” was being re-made, and ever wearier when I read that Cruise was taking the lead role. The trailers that were released didn’t make me feel any better. And they were all a precursor to a film that tries too hard to add humor (and fails in doing so) while creating no interesting characters or story.

If I was looking for a bright spot, I’d point to Johnson. His character serves mostly to advance the plot and provide comic relief, but at least he looks like he’s trying to have fun with this movie. The rest of the cast give flat, uninspired performances that suggest even during production they knew it wouldn’t work. And it doesn’t.

The story and visual effects are a shoulder shrug. This is somewhat surprising given that Christopher McQuarrie, David Koepp and Alex Kurtzman were among the six writers that worked on this film. All are talented storytellers who’ve delivered engaging films. The fact this is so inane, given the talent involved and the fact this is supposed to be the kick-off of a cinematic universe, is even more surprising.

Kurtzman served as director here, and he doesn’t get much out of the material or the cast. Crowe appears as Dr. Henry Jekyll, who will likely be the lynchpin of this universe, is particularly uninspiring. But this movie is bad from start to finish and, worse yet, unnecessary.

Prior to the summer, I identified five potential blockbusters I thought might flop. To this point, “The Mummy” is the worst of those movies, and might be the worst film I’ve seen so far this year. There is nothing appealing about it and, at this point, I don’t see how it can be the start of anything.

This is one mummy that should have remained entombed in the dessert.

“The Mummy” has been rated PG-13 by the Motion Picture Association of America for violence, action, and scary images, and for some suggestive content and partial nudity.

One star out of four.