Movie review: ‘The Huntsman’ a winter’s bore despite strong cast 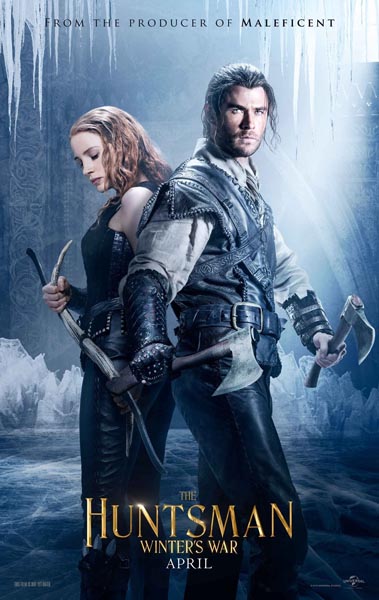 –In 2012, a pair of live-action tales about Snow White made it to the big screen. In the spring came “Mirror, Mirror,” which starred Julia Roberts as the evil queen and didn’t have much else going for it.

During the summer, “Snow White and the Huntsman” took at different route to the story. The star was still, arguably, the evil queen, this time played by Charlize Theron. But with Chris Hemsworth as The Huntsman and Kristen Stewart as Snow White, it drew audiences to the theater. The film made more than $160 million and talk of a sequel soon began.

Last Friday we got that sequel. While The Huntsman and the Evil Queen returned, Snow White — and more precisely Stewart — got the boot from the endeavor entirely.

“The Huntsman: Winter’s War” is another love story, but it’s also a story of siblings. It is both a prequel and sequel to the original, telling the tale of before and after the events surrounding Snow White — who is named but never shown in this new film.

Ravenna (Theron) has just taken her Kingdom, and she should be happily ruling with her sister, Freya (Emily Blunt). But Freya has fallen in love with a married man and has a baby. She also believes she’ll never activate her dark powers, choosing instead the way of love.

But when her lover starts a fire that kills her baby, Freya turns cold as ice, manifesting seriously frosty magical powers. She strikes out on her own and forms a frozen kingdom in the north. There she raids villages and takes all the children, raising them to be warriors who see love as folly.

Among those warriors is Eric (Hemsworth) and Sara (Jessica Chastain). They are the best of her Huntsman, but they don’t take Freya’s lessons to heart. They fall in love and make plans to run off. But Freya discovers their plan and stops them.

Flash forward and Eric is dispatched on a mission to locate Ravenna’s magic mirror, which is leaving a dark magic trail in its wake throughout the kingdom. He also has to keep in from falling into Freya’s hands, for fear that no one could stop her conquering the rest of the world.

This follow up features a strong cast and plenty of action. Blunt and Chastain make strong additions to the returning stars Theron and Hemsworth. And the film doesn’t have a bad idea for how to move the story forward. But in the end, it’s just a little boring.

Director Cedric Nicolas-Troyan makes the most out of some stunning visuals. The film looks beautiful and the colors and costumes pop. But the characters, story and dialogue don’t, and that’s a problem. The film fails to make good use of its gifted cast. And it takes too long to get to where it is so obviously going.

This is a film with a good cast and a good look, but it doesn’t translate that into being a good or particularly interesting film. It feels more like a missed opportunity.

“The Huntsman: Winter’s War” has been rated PG-13 by the Motion Picture Association of America for fantasy action violence and some sensuality.