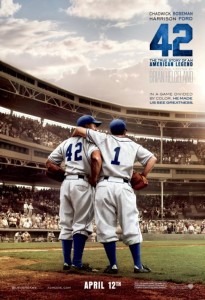 As part of my ongoing article ‘Moving Pictures of Paso Robles’  I want to bring you movie reviews as I see them. Last night I got around to seeing “42” (PG-13) and it was a home run for me. “42” follows the baseball career of the first negro baseball player, Jackie Robinson. Before I get into the movie review I want to give you some bullet notes on the life of Jackie Robinson up to the opening scene of “42”. Many may not know, but Jackie Robinson has a connection to this area I’ll touch on in a minute.

Jackie was born Jack Roosevelt Robinson, his middle name in honor of former President Theodore Roosevelt who died less than a month before his birth. He was born on January 31, 1919 in Cairo, Georgia, but his mother moved the family to Pasadena, California before he was one due to his father running out on the family. After high school, where he lettered in football, basketball, track, and baseball, he won the annual Pacific Coast Negro Tennis Tournament and earned a spot on the Pomona all-star baseball team. A couple noteworthy people he played with on the team were future Hall of Famers Ted Williams and Bob Lemon. After graduating from Pasadena Junior College, Jackie transferred to UCLA where he was the first student to letter in four sports; baseball, basketball, football, and track. In his senior year at UCLA he met his future wife Rachel Isum. Due to times being hard and family hurting financially, he dropped out of college just months before graduating. Earlier I touched on Jackie having connections to this area. After dropping out of UCLA, Jackie took a job as assistant athletic director with the National Youth Administration right here in Atascadero, California.  After the government ceased all NYA operations, he bounced around for a couple of years playing semi-professional football. After at attacks on Pearl Harbor, Jackie was drafted into the Army where he spent the next couple of years. 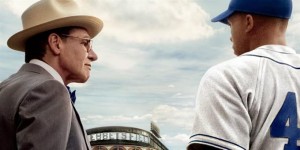 Let’s jump to 1945, where the movie “42” starts. Harrison Ford(Star Wars, Indiana Jones, The Fugitive) portrays Branch Rickey, the general manager of the Brooklyn Dodgers. Before I go any further I want to say, in my opinion, this is the best acting performance from Harrison Ford since playing Han Solo in the Star Wars movies. I expect to see a Best Supporting Actor nomination for him at the end of the year. Rickey wants to break the racial barrier in Major League Baseball and goes on the hunt for the best player from the negro leagues. After a little bit of scouting he finds his man, Jackie Robinson, who is currently playing with the Kansas City Monarchs. Jackie is played by Chadwick Boseman(The Kill Hole, Fringe) and he does an amazing job at filling the cleats of Jackie Robinson on the big screen. Nicole Beharie(Shame, The Express) also gives a great performance as Jackie’s wife, Rachel. We continue to follow Jackie as he tries out for the Dodgers minor league team, the Montreal Royals. Needless to say, it isn’t easy for him. Not because of athletic ability, but because of all the racism in America at that time. He makes the team, playing second base, but no one on the team wants to play with him. After showing off his outstanding athletic skills, he earns a spot on the Brooklyn Dodgers. They put him at first base, a position he has never played before. His struggles at learning the position are nothing in comparison to the struggles he faces with teammates, other teams, and the fans accepting a colored man in Major League Baseball. Through many trials and tribulations, Jackie eventually wins over the admiration of most of his teammates and many fans. While Jackie Robinson is stealing home plate, “42” will be stealing your heart.