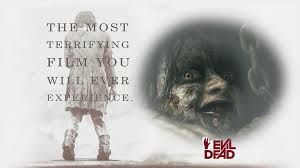 Hey there fellow Robians! I’ve been away for a bit and haven’t given y’all an entertainment article. Coming back this week I decided to re-work it a bit and focus more on just the current movies playing in Paso Robles rather than the entire county. Would love to hear your comments or suggestions of what you would like to see here as I rework the format for my weekly entertainment article here. This week I bring you a review for “Evil Dead” (R). 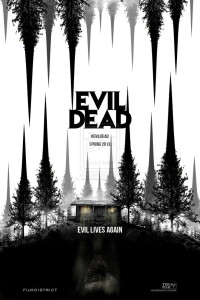 What’s that? You haven’t seen the new “Evil Dead” movie yet? What are you waiting for?! I have been following this film for some time now. Being such a huge fan of the original franchise I wasn’t happy when I first heard about a remake going into production. For those that haven’t seen the original “The Evil Dead” movies I highly suggest doing so. For those that haven’t seen the originals and this being a remake I want to take a moment to give you a brief history of the original. Released in 1981, directed by Sam Raimi(“Army of Darkness, “Oz the Great and Powerful”), and starring the one and only Bruce Campbell(Evil Dead II, Army of Darkness, Bubba Ho Tep). Bruce plays Ash, who along with his girlfriend and a few other friends, travel to a cabin in the woods of Tennessee for spring break. While there they find some old tape recordings and a book bound of human flesh known as the Book of the Dead. After listening to the recordings and reading verses out of the book, they unknowingly release some demons that begins possessing and killing the group off. Ash is our hero character, killing off his possessed friends and eventually the demonic force by destroying the Book of the Dead in the fireplace. Before he could destroy the book though, a portal was opened that sucks him into it and sending him back in time, which is where the next installment “Army of Darkness” opens up. 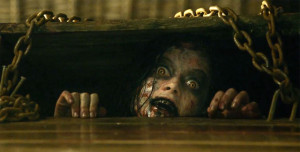 Now, to the remake “Evil Dead” which is currently in theaters right now. Directed by Fede Alvarez(Panic Attack), it follows a very similar story line. David, played by Shiloh Fernandez(“Red Riding Hood”) and three other friends take David’s sister Mia, played by Jane Levy(“Fun Size”, “Nobody Walks”) out to this cabin in the woods for a drug intervention to help get her clean. David’s friend Eric finds the Book of the Dead and wouldn’t ya know it, reads a verse out of the book releasing the demons. Mia is possessed first and then the fun begins. One by one all of the other friends become possessed and start killing each other off. In this sense it isn’t much different from the original. Let me assure you though, this movie is very different from its original counterpart. The original is very campy with lots of personality thanks to Bruce Campbell’s amazing acting. “Evil Dead” 2013 takes a different path in that they stripped away all of the fun and campy aspects, leaving us with a very gritty and horrific film. It is being slated as being one of the scariest films of the year. I wouldn’t call it scary, but I’ve seen a lot of horror movies in my day and let me tell you, it is probably hands down the goriest movie I’ve ever seen. I read somewhere they used fifty thousand gallons of fake blood on set, so that should give you an idea. While I opened with a brief synopsis of the original for those that haven’t seen them before, let me close with some final words for the fans of the original franchise that still haven’t made it out to see “Evil Dead” yet. You get exactly what you expect for the first sixty five minutes of the movie. It goes through the motions delivering possessions and killings, which were pretty much all practical effect and no CGI, which made me very happy. The effects and all of the gore was done very well. Only thing “Evil Dead” is lacking is that Bruce Campbell type character that brings the personality to the screen, giving us that character to attach to and love throughout the movie. So, if you’re like me, at this point you’re a little disappointed. Then the last fifteen minutes of movie happens and holy shit! We finally get that character we were wanting the whole time and things get crazy! I’m not going to give any spoilers here, but trust me when I say the closing scene of this movie alone makes it worth going to see. When the movie ends don’t leave though. Sit through the credits, which were amazing in them self, and you will get a very groovy treat at the end.

Oz The Great and Powerful (PG)